A year after disaster, thousands flock to Israeli holy site 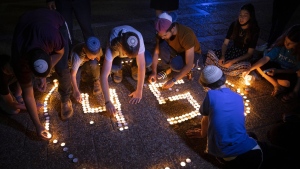 FILE - Israeli youths light candles in memory of the 45 ultra-Orthodox Jews killed in a stampede at a religious festival on Friday, during a vigil in Tel Aviv, Israel, Sunday, May 2, 2021. Police made preparations at a Jewish holy site at Mt. Meron in northern Israel ahead of the arrival of thousands of mostly ultra-Orthodox worshipers and revelers on Wednesday, May 18, 2022, a year after a chaotic stampede linked to overcrowding left 45 people dead. (AP Photo/Oded Balilty, File)

JERUSALEM (AP) — Police made preparations at a Jewish holy site in northern Israel ahead of the arrival of thousands of mostly ultra-Orthodox worshipers and revelers on Wednesday, a year after a chaotic stampede linked to overcrowding left 45 people dead.

This year's Lag Ba'Omer holiday festivities at Mount Meron are overshadowed by last year's deaths, the largest civilian disaster in the country's history.

Highways leading to the mountain were already gridlocked hours ahead of the celebrations.

An independent commission of inquiry launched after the disaster looked into major safety lapses and overcrowding at the mountaintop site and recommended limiting attendance and revamping safety protocols and infrastructure.

Attendance this year is limited to 16,000 people, who had to secure tickets in advance. Police said that around 8,000 police officers would be stationed around the site to maintain order.

The site is believed to be the burial place of a prominent second century rabbi, and has drawn Jewish pilgrims and worshipers for centuries. The springtime festival is marked by large bonfires, singing and dancing.

On Tuesday, police said they stopped a minibus near Mount Meron carrying members of a radical ultra-Orthodox sect in possession of box cutters, wire cutters, paint bombs and other tools that officers suspected were meant to vandalize infrastructure at the site. At least three people were arrested.

Israeli Prime Minister Naftali Bennett said ahead of the holiday's commencement at sundown Wednesday that “the government of Israel has made a large investment in order to allow wide and safe participation."

“I ask the public to act according to the published guidelines and to arrive with a ticket in order that we can hold the festival safely,” he said.