At least 6 injured in cargo ship fire at Manila wharf 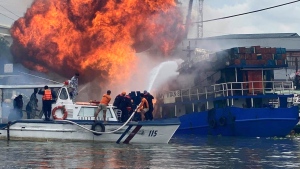 The fire injured at least six people and ignited a blaze in a nearby riverside slum that gutted dozens of shanties.

It was not immediately clear what triggered the fire, which raged for about seven hours Saturday onboard the MV Titan 8.

The ship, which was carrying fuel drums, had docked at a wharf in Manila's Tondo slum district to refuel prior to a domestic trip to the western Palawan province.