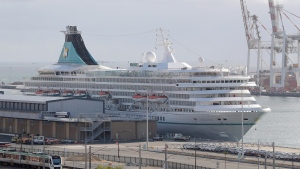 This Friday, March 27, 2020, photo shows the cruise ship Artania docked at Fremantle harbour in Fremantle, Australia. Authorities were still hoping to fly 800 cruise ship passengers from Australia to Germany on the weekend, but a sharp overnight rise in cases of the new coronavirus on board brought severe complications for the repatriation mission. (Richard Wainwright/AAP Image via AP)

SYDNEY, Australia -- Australian authorities pressed ahead Saturday with plans to fly 800 cruise ship passengers to Germany this weekend after a downward revision in the number of people on board who needed to be tested for the coronavirus.

Plans had been put in place to fly the European passengers to Germany from the Western Australia state capital, Perth, near where their ship, the Artania, is docked at the port of Fremantle.

The plans were thrown into doubt by an apparent spike in the number of people on the ship who were suspected of being infected with the new coronavirus - from nine confirmed cases on Friday to more than 70 possible ones early Saturday.

But state officials who conducted examinations on board the ship concluded later Saturday that only 46 people needed to be be tested for the virus, comprising 30 passengers and 16 crew.

State Premier Mark McGowan told reporters that four chartered flights would take around 800 healthy passengers and some crew back to Europe.

“Cruise ships continue to be the Achilles' heel when it comes to managing this situation,” McGowan said.

A spokesman from the German Embassy in Canberra, Australia's capital, said Ambassador Thomas Fitschen and consular officials in Perth had been liaising with the federal and Western Australian governments to repatriate the passengers.

“The cruise ship's tour operator has chartered aircraft for this purpose,” the spokesman was quoted as saying on the news website WAtoday. “Moreover, the tour operator's agent in Perth is liaising with local authorities and the ship's captain to handle this issue expeditiously.”

Another ship, the Vasco da Gama, docked in Fremantle on Friday night, with 800 Australian passengers set to go into quarantine for two weeks while New Zealand passengers flew home.

Plans for some 30 British passengers who were also on board were not immediately clear.

A third ship, the Magnifica, is anchored off Fremantle with no COVID-19 patients on board, and is expected to leave after being resupplied.

Also on Saturday, Australia's government announced an added financial aid package to assist the country's struggling airlines. It assured citizens that the country's hospital system could cope with the expected wave of coronavirus cases, and prepared for the return to Sydney on Sunday of 3,000 of its citizens.

Those arrivals will be quarantined in hotels paid for by the federal government, and will not be permitted to leave their rooms.

“They will check in - they're not criminals, they're decent Australians returning home and they'll receive food and hotel rooms, communications,” New South Wales state police commissioner Mick Fuller said. “These truly are unprecedented times ... we'll treat these people with respect and dignity, but we'll need their support in terms of understanding that this is about all the people of New South Wales.”

Australia had 3,635 confirmed cases of COVID-19 as of Saturday afternoon, with a steep rise of 469 new cases in 24 hours. Fourteen people have died from the disease in Australia. More than 202,000 coronavirus tests have been carried out, the federal government said.