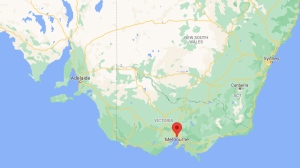 Melbourne, Australia is indicated on this map. (Google)

CANBERRA, Australia (AP) - Police said on Tuesday they were investigating the death of a man who was reportedly killed when an explosive vest he was wearing detonated while he was driving his car in a suburban street in the Australian city of Melbourne.

The vest was understood to have been triggered by the car hitting a speed bump on Young Road in the suburb of Hallam on Saturday morning, Seven News reported.

Security camera video showed the flash of the explosion rise about the car's roof and from the driver's side window. A speed bump wasn't apparent in the video.

The car continued to travel a few hundred meters before it hit a parked vehicle near the corner of Young Road and Homewood Boulevard.

Emergency services were called to reports of a minor vehicle collision at the intersection at 11:40 a.m. local time, a police statement said.

A 43-year-old man from the suburb of Dandenong was found dead inside his car, which also contained “explosive items,” police said. Police have not released his name.

“The circumstances surrounding his death are under investigation by the Arson and Explosives Squad and it is not being treated as suspicious,” police said. The term “not suspicious” means police do not consider the man was a victim of a crime.

Police did not say where the man was heading. He had visited the home of his ex-partner immediately before his death, Seven reported.

“I just heard a big, loud bang at 11 a.m. and looked out the window of my house and saw a car had gone through the roundabout and hadn't braked or anything like that and crashed,” Augel told Seven.

Seven described the driver as a former soldier and a father.

A spray painted tribute on a brick wall near the scene of the tragedy said: ”Dad my soldier 4 ever” with a love heart.