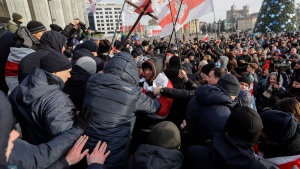 MINSK, Belarus -- More than 1,000 opposition demonstrators are rallying in Belarus to protest closer integration with Russia.

The two presidents are discussing economic agreements intended to bring the two ex-Soviet neighbours and allies even closer. Lukashenko, who has ruled Belarus with an iron fist for more than a quarter-century, relies on cheap Russian energy and loans to maintain a Soviet-style economy.

The Kremlin has cranked up pressure on Belarus, raising energy prices and cutting subsidies, but Lukashenko vowed not to surrender Belarus' post-Soviet independence.

Some in Belarus fear that the agreements could pave the way for afull merger -- concerns fueled by Russia's 2014 annexation of Ukraine's Crimea.