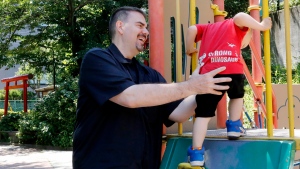 In this Monday, June 4, 2018, file photo, Glen Wood, a Canadian who has lived in Japan for 30 years, plays with his son at a Tokyo park. A Japanese court has rejected the demand by former brokerage manager Wood to get his job back after he took paternity leave at Mitsubishi UFJ Morgan Stanley. (AP Photo/Yuri Kageyama, File)

TOKYO -- A Japanese court on Friday rejected a request by a former brokerage manager to get his job back after he took paternity leave at Mitsubishi UFJ Morgan Stanley.

The case of Glen Wood, a Canadian who has lived in Japan for three decades, has become a symbol of the fight against what is called “paternity harassment,” or “pata hara.”

Working women have long complained about such treatment when they take maternity leave. Wood is among a handful of fathers who have filed cases.

“They took everything the company said at face value,” he said of the Tokyo District Court's ruling.

“There are millions of victims out there. And so from that perspective, this court case is no longer my court case. It's a court case for millions of people out there who have been harassed,” he said.

Wood said he would appeal.

In an 80-page ruling, the court said it did not find “reasonable grounds” for believing there was harassment. It also criticized Wood for asserting harassment, including telling his story to the media, instead of trying to work out the problem with the company.

Wood alleged in a 2017 petition that he was harassed and forced from his job after taking paternity leave when his son was born in 2015.

The company, which denies he was harassed, dismissed him in 2018. It said the ruling showed the court backed its views, and that it would continue its efforts to provide a good working environment for all employees.

During earlier court testimony, Akihiro Kiyomi, Wood's former boss, and Chiharu Abe, who took over Wood's job at the company, said they reduced his workload after his child was born because they thought he needed to take it easy as a single father.

But they acknowledged they had not consulted Wood and appeared not to know Wood had hired full-time help.

Wood had applied for paternity leave, but the company refused to give it. Wood's son was born prematurely and so he rushed to see him without receiving permission. When he returned to work in 2016, chunks of his former assignments were gone and he was stripped of responsibilities, according to court testimony.

The government, worried about Japan's shrinking population and a birth rate that's among the lowest in the world, has made parental leave a policy priority. On the books, Japan has relatively generous parental leave measures which allow absences of up to 12 months.

But actual practice frequently doesn't live up to the law. Wood's case has drawn considerable attention, and an online petition has drawn thousands of signatures of support.