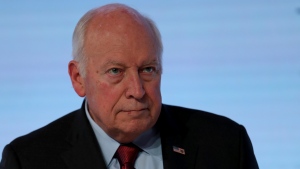 While stressing that he's no longer in government, Cheney's comments in Dubai cut to the core of several policies taken by Trump, including the sudden withdrawal of U.S. forces from Syria.

The former vice-president mentioned Trump by name only once in praising him for pulling out the 2015 nuclear deal with Iran. But Cheney's backing of a muscular military response in the Mideast starkly contrasts Trump's promises to pull America from what he calls the Mideast's "blood-stained sands."

"Russia is always on standby to fill power voids. That is how it happened that Russian troops swept in when the U.S. left northern Syria," Cheney told the Arab Strategy Forum. "To sum up that still-unfolding story: nobody will remember it as our finest hour."

Cheney said that, as well as other challenges from extremist groups like al-Qaida and the Islamic State group, show "inaction can carry even greater risk than action."

"There are some deeply malign forces at work in the broader Middle East, as well as disturbing influences from outside," Cheney said. "Disengagement is just another term for leaving all the power to them."

On Iran, Cheney alleged that "the mullahs in Tehran want most of all to acquire nuclear weapons." However, the U.N.'s International Atomic Energy Agency says Iran stopped any organized nuclear weapons research in 2003 and Tehran insists its program is for peaceful purposes, even as it begins breaking limits of the deal.

"This post-war system has been so fundamental that it has hardly mattered year to year which political parties were in power," the vice-president added, leaving unmentioned Trump's criticism of the alliance.

Cheney's visit marks one of many by former Western officials drawn to the Emirates for speaking fees at any number of panels and events held in this federation of seven sheikhdoms home to the skyscraper-studded city of Dubai.

Dubai's ruler, Sheikh Mohammed bin Rashid Al Maktoum, attended the talk by Cheney, showing the respect still afforded to the 78-year-old former vice-president. Cheney made a point himself to describe the UAE as "confident, forward-looking influence in the Middle East."

As defence secretary under President George H.W. Bush, Cheney helped form the coalition that forced Iraqi dictator Saddam Hussein's forces out of Kuwait in the 1991 Gulf War. He visited the UAE in 1990, becoming at that time the highest-ranking U.S. official to ever visit the country.

The 1991 war gave birth to the wide American military footprint across the region, including in the United Arab Emirates, which hosts some 5,000 U.S. troops at Abu Dhabi's Al Dhafra Air Base and elsewhere. Dubai's Jebel Ali port is the U.S. Navy's busiest foreign port of call.

Cheney also visited the Emirates as vice-president as the U.S. relied on the UAE and other Mideast partners amid the 2001 invasion of Afghanistan and the 2003 war in Iraq that ousted Saddam but sparked sectarian warfare that ultimately birthed the Islamic State group.