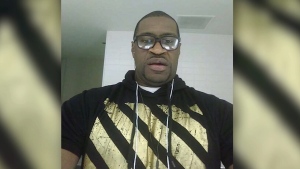 George Floyd is seen in this undated photo.

MINNEAPOLIS -- The trial of four former Minneapolis police officers charged in George Floyd's death will generate massive public interest when it begins in March, but as it stands, most people who want to watch the proceedings will be out of luck.

The judge overseeing the case has yet to decide whether cameras will be allowed. Supporters of audio and visual coverage say the high-profile nature of Floyd's death, the outrage that led to worldwide protests, and courtroom restrictions caused by the coronavirus pandemic make this the right time and case to allow cameras in court. But the state attorney general's office, which is prosecuting the case, opposes them, saying cameras would only create more problems.

"I just can't think of a situation where it's more important than a case like this for the public to see what's actually transpiring in the courtroom," said Jane Kirtley, director of the Silha Center for the Study of Media Ethics and Law.

"Justice that cannot be observed cannot really be considered justice. The public won't believe what they can't see," she added.

In June, Judge Peter Cahill decided against allowing audio and visual coverage of pretrial proceedings because he said it would risk tainting the possible jury pool and the state opposed it. But Cahill, who is still weighing requests to try the defendants separately, said he would rule on trial audio and video coverage at a later date. It's unclear when that ruling will come.

Floyd, a Black man who was handcuffed, died May 25 after Derek Chauvin, a white officer, pressed his knee against Floyd's neck even as Floyd said he couldn't breathe. Floyd's death was captured in widely seen bystander video that set off protests around the world.

Unlike many other states, Minnesota does not allow cameras at criminal trials before sentencing unless the judge, prosecutors and defence attorneys agree to them. The former officers have consented to cameras, but prosecutors have resisted, saying they may revisit the issue as the trial nears.

Defence attorneys say cameras would help ensure the trial is fair and open during the pandemic, when courtroom attendance has been limited to allow for social distancing. They have asked Cahill to grant camera access regardless of whether prosecutors agree.

Prosecutor Matthew Frank wrote in July that the state was concerned that live audio and visual coverage "may create more problems than they will solve." Among them, Frank wrote, broadcast coverage of the trial could alter the way lawyers present evidence, force participants to endure even more media scrutiny or intimidate witnesses.

Earl Gray, Lane's attorney, said in a written response that it was "obvious" Frank and Attorney General Keith Ellison have never tried a televised high-profile case. "I have tried a handful in Wisconsin and there is absolutely no issue. You do not even know the cameras are there."

A coalition of media organizations, including The Associated Press, has requested camera access, arguing that cameras would increase transparency, especially during the pandemic.

Kirtley, who is part of the coalition, said any concerns that cameras would be disruptive can be managed by the judge. Although overflow courtrooms can increase access, they are often small, their closed-circuit monitors may not provide the best quality and the experience is usually diminished. She said meaningful access is key, and there should be a presumption that the public has a right to see everything that happens in the courtroom.

Livestreaming proceedings to the court's YouTube channel could be an option as well, she said. Other states have chosen to do that during the pandemic.

"It's frankly time for us to move into the 21st century," Kirtley said.

Raleigh Hannah Levine, a professor at Mitchell Hamline School of Law, said many states have used cameras in the courtroom for years and concerns raised by Ellison's team have been largely non-issues.

Most of the concerns, she said, stemmed from the 1995 O.J. Simpson trial, where attorneys, the judge and witnesses were criticized for apparently performing for the camera. She said the world has come a long way since then and that the widespread use of social media, not to mention the increase in videoconferencing during the pandemic, has changed many people's views about being captured on video.

Levine also said the Supreme Court -- which made history in May by hearing arguments by phone and allowing the world to listen in for the first time -- has long recognized that open proceedings can serve as a check on possible abuses and can prevent vigilantism.

"If people see how the trial is proceeding, they have less reason to take the matter into their own hands," she said. If people can see how the judge handles a trial, how evidence is presented and hear witnesses for themselves, it can increase their confidence in the judicial system.

"Whichever way it comes out, people won't be as outraged by a verdict that they dislike because they might understand how it was reached," she said.