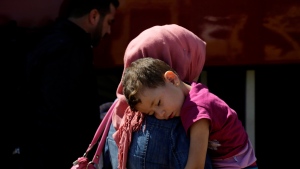 A woman with her child migrant from Syria walk towards a refugee camp at Kokkinotrimithia, outside of the capital Nicosia, in the eastern Mediterranean island of Cyprus, on Sunday, Sept. 10, 2017. Cyprus police say a 36-year-old man has been arrested for allegedly driving one of a pair of boats that brought 305 Syrian refugees to the island's northwestern coast. (AP Photo/Petros Karadjias)

NICOSIA, Cyprus - Cyprus police say 120 Syrian migrants have been housed at a reception centre after arriving from Turkey aboard a boat.

Police said Thursday that the 97 men, 20 children - including 14 unaccompanied minors - and three women told authorities they each paid people traffickers $4,000 (3,620 euros) for a spot on the boat.

Their vessel was spotted Wednesday sailing off Cape Greco on the southeastern tip of the island nation and was escorted to an area harbour.

The migrants said they set sail from Turkey's southern port city of Mersin after crossing the Syrian-Turkish border on separate dates.

Cyprus officials say a migrant influx is taxing the small country's ability to host so many arrivals and is asking fellow European Union member states to share the burden.