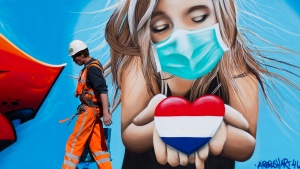 A construction worker passes a mural by artist Casper Cruse, showing a woman with a face mask holding a heart in the colors of the dutch flag as a statement of support for those suffering from the effects of the coronavirus, in The Hague, Netherlands, Friday, April 24, 2020. (AP Photo/Peter Dejong)

THE HAGUE, Netherlands - The Dutch health minister said Tuesday he plans to introduce mandatory home quarantine for people identified by local authorities as having been in close contact with somebody infected with the coronavirus, and for travellers returning from high-risk countries.

Health Minister Hugo de Jonge said in a letter to lawmakers that mandatory quarantine could be imposed if people refuse to isolate voluntarily.

The move comes amid rising infection rates in the Netherlands and an unwillingness among some people to adhere to social distancing measures and co-operate with contact tracing.

“Mandatory quarantine is a tough measure but justified. Quarantine stops the spread of the virus so sticking to the rules is crucial,” De Jonge wrote.

He added that he also wants to introduce mandatory quarantine for travellers returning from countries considered a high risk for infections. It is not clear how soon such a measure can be implemented. De Jonge said that the move will require a law change.

Earlier Tuesday, the Dutch public health institute said there were 4,036 new confirmed infections in the last week, 1,448 more than the week earlier.

The institute said that the confirmed number of people who have died of COVID-19 rose by nine to 6,159. The true number of deaths could be higher because not all people who died of suspected COVID-19 were tested.

The increases come despite local initiatives aimed at reining in infections, which have been climbing since the Dutch government relaxed lockdown measures on July 1.

The country's two most populous cities -- Amsterdam and Rotterdam -- last week made use of face masks mandatory in a number of busy streets and markets.

The percentage of people who tested positive also is rising, from 2.3% in the previous week to 3.6% over the last seven days.

Dutch lawmakers are returning from their summer recess Wednesday for a debate on the government's handling of the pandemic.