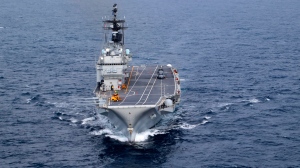 In this Friday, Nov. 25, 2016 photo, the Italian Navy Giuseppe Garibaldi light aircraft carrier, seen from a helicopter, sails on the Mediterranean Sea, off the coast of Sicily, part of the European Union's naval force Operation Sophia. Operation Sophia was launched to disrupt human smuggling operations in the Central Mediterranean. (AP Photo/Nicolae Dumitrache)

"Operation Sophia is closed. Finished," Asselborn told reporters in Brussels on the sidelines of a meeting of EU foreign ministers. He said a "political agreement" had been reached to close the operation, launched in 2015 to crack down on migrant smugglers, when its mandate expires in March.

THIS IS A BREAKING NEWS UPDATE. Check back soon for more information. The previous story is below.

A number of European Union countries are still blocking any move to resume a naval operation in the Mediterranean Sea over concerns that it might encourage migrants to set out from Libya in search of better lives in Europe, the EU's top diplomat said Monday.

The naval mission, Operation Sophia, was launched in 2015 amid a wave of migration across the sea from North Africa to Europe. The aim was to crack down on migrant smugglers and enforce a U.N. arms embargo on conflict-torn Libya, which is routinely being flouted.

But tensions between EU nations over how to distribute migrants picked up at sea and claims that the naval presence might only encourage smugglers led Italy to block the deployment of further ships last year. It currently functions almost exclusively using aircraft and pilot-less drones. Austria too is opposing the return of warships.

"There are people who believe that more assessment has to be done to be sure that it's not going to produce a pull effect," EU foreign policy chief Josep Borrell told reporters in Brussels before hosting a meeting of EU foreign ministers. "My analysis of the figures, the data, I am not convinced of that. But some believe it."

He did not name the countries concerned, but he cast doubt over whether the issue would be resolved this month, despite increasing international calls for ensuring that the arms embargo on Libya is respected.

Libya has been in turmoil since 2011, when a civil war toppled long-time dictator Moammar Gadhafi, who was later killed. Fighting between the country's factions has intensified over the last year.

A weak U.N.-recognized Libyan government that now holds the capital of Tripoli and parts of the country's west is backed by Turkey, which recently sent thousands of soldiers to Libya, and to a lesser degree Qatar and Italy, as well as local militias.

On the other side is a rival government in the east that supports self-styled Gen. Khalifa Hifter, whose forces launched an offensive to capture Tripoli last April. They are backed by the United Arab Emirates, Egypt, France and Russia.

Borrell said "the situation on the ground is very, very bad."

Ahead of Monday's talks, Borrell's office circulated a memo urging EU nations to agree on whether gathering information on, and upholding, the U.N. arms embargo against Libya should become the naval mission's "core task." Monitoring migrant smuggling would be a "supporting task" carried out from the air.

The memo warned that otherwise "the EU will become irrelevant and others will continue to determine the development of events in Libya."

German Foreign Minister Heiko Maas, who hosted a meeting Sunday on Libya in Munich, sa id the EU must play its part. He said it doesn't matter how the bloc helps police the arms embargo "but it is important that we can monitor -- whether on land, in the air or on the water -- whether the embargo is broken."

Maas urged his EU partners to realize that the insecurity and fighting in Libya was creating a huge population of migrants seeking to enter Europe illegally.

"(Europe's) migration problems can only be solved if Libya does not remain a failed state," Maas said. "Ending the civil war is a precondition to find answers to all questions that are important to us in Europe."

Luxembourg Foreign Minister Jean Asselborn said Berlin's efforts to seek a political solution for Libya's instability "is not worth much if there is no control over the arms embargo and the troops that move around in Libya. That's why we have to watch the sea. It's a European obligation."

Asselborn took aim at Austria, which is also blocking the naval mission.

"It's too much, to abandon or break with our consensus, just to avoid having to save a few people (at sea)," he said.

But Austrian Foreign Minister Alexander Schallenberg insisted that "something new has to be put in place; a military operation, not a humanitarian operation."

"What we have to achieve is less weapons in the country, no mercenaries and to impose the arms embargo," he said.