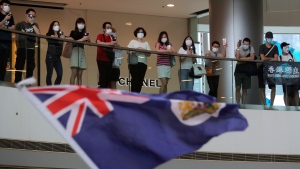 Protesters sing "Glory to Hong Kong" and wave a Hong Kong colonial flag in a shopping mall during a protest against China's national security legislation for the city, in Hong Kong, Friday, May 29, 2020. (AP Photo/Kin Cheung)

The ministers, holding talks via videoconference, are weighing the need for firm policy against the damage that it might do to business ties between the Asian economic giant and the world's biggest trading bloc.

The 27 EU nations are often divided in their approach to China, but Beijing's imposition of a national security law on Hong Kong -- a Chinese territory that is supposed to have a high degree of autonomy under a "one-country, two systems" framework -- seems to have united them.

"Hong Kong's high degree of autonomy cannot be undermined. We expect the freedoms and rights for the citizens to be protected through their basic law and the `one country, two systems' principle," German Foreign Minister Heiko Maas said Friday.

Hong Kong's pro-democracy opposition sees the move as an assault on the territory's autonomy, and the United States has called on China to back off on the security law. But no talk of any EU action, never mind sanctions, is likely.

EU foreign policy chief Josep Borrell, who is chairing the meeting, said Monday that the bloc needs a "more robust strategy" toward China amid signs that Asia is replacing the United States as the centre of global power.

Borrell said that relations between Brussels and Beijing aren't always based on trust, transparency and reciprocity, and that "we only have a chance if we deal with China with collective discipline."

He noted that an EU-China summit this fall could be an opportunity to do so.

In recent weeks, Borrell has been forced twice to deny that the External Action Service -- the EU's equivalent of a foreign office --has bowed to Chinese pressure to water down a report on fake news linked to the coronavirus and a newspaper op-ed referencing the disease's origins in Wuhan.