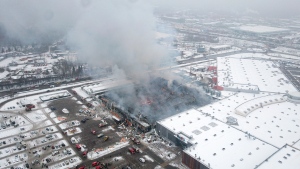 Smoke rises from the OBI mall in Khimki, just outside Moscow, Russia, Friday, Dec. 9, 2022. A massive fire has destroyed a shopping mall on Moscow outskirts, killing one man. The authorities said that Friday's blaze at the OBI mall in Khimki on Moscow northwestern outskirts was caused by violation of safety regulations during welding works. The huge fire erupted early Friday before the mall's opening and raged for hours, engulfing the entire building of 17,000 square meteres. (AP Photo/Kirill Zarubin)

MOSCOW (AP) - One man was killed after a massive fire on Friday ravaged a shopping mall on Moscow's northwestern outskirts.

Authorities said the blaze at the OBI store, part of the MEGA shopping mall in Khimki outside the Russian capital was sparked by welding that apparently violated safety regulations.

The huge blaze erupted before the mall opened it's doors to customers, engulfing the entire building of 17,000 square meters (183,000 square feet).

Officials initially said arson may have been involved, but later said it was due to unsafe welding.

A probe into the possible violation of safety rules has been launched.