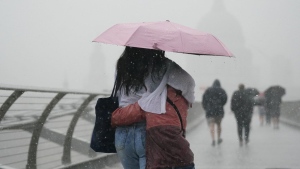 People with umbrellas walking in the rain on Millennium Bridge, London, Wednesday Aug. 17, 2022.. After weeks of sweltering weather, which has caused drought and left land parched, the Met Office's yellow thunderstorm warning forecasts torrential rain and thunderstorms that could hit parts England and Wales. (Victoria Jones/PA via AP)

PARIS (AP) - After a summer of drought, heat waves and forest fires, violent storms are whipping France and neighboring countries and have flooded Paris subway stations, snarled traffic and disrupted the president's agenda.

Winds over 100 kph (60 mph) were recorded at the top of the Eiffel Tower during a flash flood Tuesday, and similar winds were forecast Wednesday in the southeast.

Hail hammered Paris and other regions in Tuesday's sudden storm. Rainwater gushed down metro station stairwells and onto platforms, and cars sloshed along embankments where the Seine River broke its banks.

In southern France, thunderstorms overnight and Wednesday flooded the Old Port of Marseille and the city's main courthouse and forced the closure of nearby beaches.

As scattered storms swept across Belgium on Wednesday, one flooded parts of the historic town of Ghent following weeks of unrelenting drought.

London and other parts of southern England were lashed with torrential rain and thunderstorms after one of the driest summers on record which gave the country its first-ever 40 degree Celsius (104 Fahrenheit) temperature last month.

There was widespread flash flooding as the downpours fell on parched ground.

Despite the rain, much of Britain is still officially in drought. Thames Water, which supplies 15 million people in and around London, says a ban on watering lawns and gardens will take effect Aug. 24.

Much of Western Europe has experienced a season of extreme weather that scientists link to human-made climate change.

Amid the storm warnings, French President Emmanuel Macron postponed an event Wednesday on the French Riviera to mark the 78th anniversary of a key Allied invasion of Nazi-occupied France. It was rescheduled for Friday.

The dramatic downpours put an end to weeks of historic heat that left much of France parched, rivers dry and dozens of villages without running water.

Across much of Europe this summer, a series of heat waves has compounded a critical drought, creating prime wildfire conditions.

Rainfall in recent days has eased the burden on firefighters facing France's worst fire season in the past decade, though emergency authorities said scattered wildfires continued to burn Wednesday in southwest France.