France: Arrested man not the suspect in Khashoggi's murder 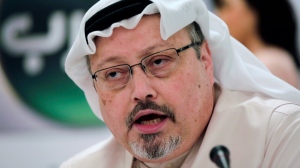 PARIS (AP) -- French authorities announced Wednesday that a man arrested at Paris-Charles De Gaulle Airport for allegedly being linked to the 2018 killing of Saudi journalist Jamal Khashoggi was misidentified.

The Paris General Prosecutor's office issued a short statement Wednesday after over 24 hours of checks, saying that the man arrested Tuesday was not the Khalid Aedh al-Otaibi, who is wanted under a 2019 Turkish arrest warrant.

"The (arrest) warrant does not apply to him," the statement said, without elaborating.

French media reported that the mix-up was related to the fact that the detained man had an identical name to al-Otaibi.

A judicial official told The Associated Press that the suspect can be held until Thursday morning at the latest, but he will likely be released before.

The Saudi Embassy in Paris always maintained that it was a case of mistaken identity, and the arrested man "had nothing to do with the case in question."