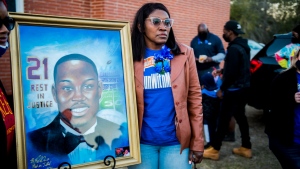 Wanda Cooper-Jones, the mother of Ahmaud Arbery, stands with a painting of her son during a candlelight vigil in his honor at New Springfield Baptist Church in Waynesboro, Ga., Tuesday, Feb. 23, 2021. The event marks the fist anniversary of his death. (Michael Holahan/The Augusta Chronicle via AP)

SAVANNAH, Ga. - A Georgia judge Friday scheduled an October trial for three white men charged with murder in the slaying of Ahmaud Arbery, a 25-year-old Black man who was chased and shot while running in the defendants' neighbourhood last year.

Superior Court Judge Timothy Walmsley issued a notice stating that jury selection will begin Oct. 18, with the trial commencing as soon as a jury is seated.

Greg McMichael and his grown son, Travis McMichael, armed themselves and pursued Arbery in a pickup truck on Feb. 23, 2020, just outside the port city of Brunswick, about 70 miles (110 kilometres) south of Savannah. A neighbour, William “Roddie” Bryan, joined the chase and took cellphone video of Travis McMichael shooting Arbery at close range.

Authorities didn't bring charges in the case until more than two months later, when the video became public and sparked a national outcry over the case. They have been jailed without bond since their arrests.

“There is not one attorney in this case that wants it to be delayed any further,” said Jason Sheffield, one of Travis McMichael's defence lawyers. “We are eager to finally have an opportunity to fairly disclose the full truth about the circumstances and the events that led up to this incredible tragedy.”

He said he wants to try to find an impartial jury in coastal Glynn County, where the shooting occurred, but will be prepared to ask the judge to move the trial if jury selection reveals pretrial publicity had too much influence.

Sheffield and attorneys for the other defendants have insisted the three men committed no crimes. The McMichaels' lawyers have said they pursued Arbery, suspecting he was a burglar, after security cameras had previously recorded him entering a home under construction. They say Travis McMichael shot Arbery while fearing for his life as they grappled over a shotgun.

Prosecutors have said Arbery stole nothing and was merely out jogging when the McMichaels and Bryan chased him.

Their first appearance before a federal magistrate judge is scheduled for next Tuesday, followed by two days of pretrial hearings in the state's murder case.

In previous court hearings, Georgia prosecutors have presented evidence that racism may have played a role in Arbery's slaying.

Last June, Georgia Bureau of Investigation agent Richard Dial testified Bryan told investigators that Travis McMichael uttered a racist slur right after the shooting as he stood over Arbery, who was bleeding on the ground.

Sheffield said Travis McMichael denies making the remark and there's been no evidence to back up what Bryan told investigators.