Germany divided over plans to nix rules despite outbreaks 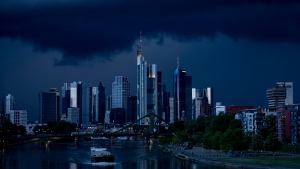 In this Friday, May 1, 2020, file picture, a cargo ship passes on the river Main with the buildings of the banking district in background in Frankfurt, Germany. The German economy shrank by 2,2 percent in the first quarter of the year compared to the same period in 2019 amid a global downturn linked to the coronavirus pandemic. Germany's Federal Statistical Office said Monday that it was the biggest quarterly decline since the 2008-2009 global financial crisis. (AP Photo/Michael Probst, file)

BERLIN - A spat was brewing Monday between Germany's federal government and state governors over plans by some regional leaders to end pandemic-related restrictions despite fresh clusters of cases across the country.

The country has seen a steady decline in the overall number of COVID-19 cases thanks to measures imposed 10 weeks ago to limit personal contacts.

But as restrictions have slowly been lifted there have also been case spikes across Germany linked to slaughterhouses, restaurants, religious services, nursing homes and refugee shelters.

Current general coronavirus rules are due to expire on June 5, and on the weekend, the governor of the state of Thuringia, Bodo Ramelow, said he hopes to lift the remaining statewide lockdown rules on June 6 and tackle outbreaks locally.

In Germany, state governments are responsible for imposing and lifting lockdown restrictions. All 16 states currently have coronavirus rules, including physical distancing requirements and an obligation to wear masks on public transport and shops, and Thuringia's new approach would raise pressure on other states to ease their lockdowns further.

Chancellor Angela Merkel's spokesman, Steffen Seibert, told reporters a planned meeting of Merkel's special “Corona Cabinet” had been called off Monday because there wasn't agreement on the issues yet. He denied reports the cancellation was linked to the Thuringia proposal.

Seibert said Merkel wants to continue “bravely, and carefully” with easing restrictions, noting outbreaks after a Baptist service in Frankfurt and at a restaurant in the country's northwest as examples of what can happen if rules aren't followed.

Following Ramelow's announcement, the neighbouring state of Saxony said Monday that it, too, is aiming for a “paradigm change” on pandemic rules from June 6 if infections remain low.

Federal and state officials agreed earlier this month that restrictions would be re-imposed if there are more than 50 new infections per 100,000 inhabitants in a city or county within a week.

As it stands, Germany's public health agency, the Robert Koch Institute, said Monday that several states reported no new cases overnight, and that the overall total grew by only 289. The seven-day reproduction factor, defined as the mean number of people infected by an infected person, remained under 1 at 0.93, indicating a contraction of new cases.

Health Minister Jens Spahn cautioned, however, against giving the impression that the pandemic is over.

Spahn told tabloid paper Bild that “on the one hand we are seeing whole regions where there are no new reported infections for days. And on the other hand local and regional outbreaks in which the virus is spreading quickly again and immediate intervention is required.”

Germany has reported more than 180,000 cases of the coronavirus and nearly 8,300 deaths, according to a tally by Johns Hopkins University.