Girl hurt in California school shooting gets out of hospital 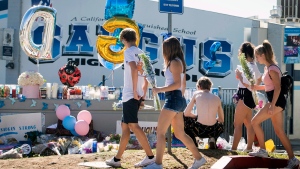 Detectives are searching for a motive for the killings carried out last Thursday by Nathaniel Tennosuke Berhow at Saugus High School in Santa Clarita. The teen shot himself and later died. Authorities say Berhow didn't appear to be linked to any ideology.

A wounded 14-year-old girl was released from the hospital Friday. A 14-year-old boy was treated and released Thursday.

The dead were identified as 15-year-old Gracie Anne Muehlberger and 14-year-old Dominic Blackwell.

Thousands of people attended a candlelight vigil for the victims at a city park Sunday night.