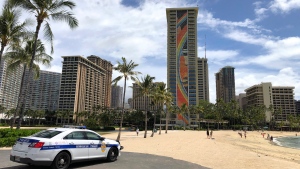 HONOLULU -- Hawaii Gov. David Ige further tightened travel restrictions to limit the spread of the coronavirus on Monday by ordering people moving between islands to adhere to a 14-day self-quarantine.

The order, which takes effect at midnight on Wednesday, won't apply to essential workers like health care workers travelling to other islands.

The order comes a week after Ige ordered people arriving from other states or overseas to follow the same two-week quarantine. He's also ordered all residents to stay at home for the next month.

Earlier, a University of Hawaii economist told lawmakers the coronavirus pandemic has plunged the state's economy into a recession that's unprecedented for people alive in Hawaii today.

"We know Hawaii is already in a deep recession. That recession will surpass anything we've seen in our lifetimes," Carl Bonham told members of a House committee on the economic and financial effects of the virus.

"There's really not any comparison that you can make to an economy where you basically shut down hospitality and tourism -- and will remain shut down for several months -- shut down much of the local economy," Bonham said.

He and the other committee members spoke to each other over a video conference as they practiced social distancing. The state capitol building was closed earlier this month when a senator tested positive for COVID-19. Olelo Community Media broadcast the video conference online and on television.

Bonham said it's difficult to predict what's in store for the economy because it's not known how long the health crisis will last and how long the recovery will take.

"We haven't identified the bottom yet," Bonham said.

But he said he's currently forecasting that the state's unemployment rate will likely peak at 25% in the April-June quarter.

Income will not drop as much because of new federal legislation providing extra unemployment benefits and direct payments to people.

When asked about this projected decline, Gov. David Ige told a news conference that his administration has been examining ways to cut spending. He said the state will also have access to reserve funds, and that money provided to the state by recent federal legislation will help.

For the full year, which includes strong performances in January and February and a predicted recovery later in the year, Bonham said the number of travellers to Hawaii will likely be 41% lower than 2019.

Hawaii on Monday reported 29 new cases of the disease, bringing the state's total to 204. No one has died in the islands to date, though 12 have been hospitalized. State Department of Health Director Bruce Anderson said until recently most people testing positive in Hawaii contracted the disease while travelling or from someone who had travelled. But he said many people newly testing positive had contracted the illness in the community.

House Speaker Scott Saiki said he agreed with steps to help the economy that were outlined in a University of Hawaii Economic Research Organization report last week. It called for stemming the influx of new infections, which the state has done by imposing a 14-day quarantine on travellers to the islands, and slowing the virus' spread in the local population, which it is doing through the governor's statewide stay-at-home order.

The report also called for wider testing of those with symptoms and at elevated risk, plus proactive efforts to trace people positive cases have had contact with.

Saiki said it was important to keep residents' safety net and economy intact amid the upheaval. He said it was especially critical that Hawaii keep its residents in the islands.

"We need to focus immediately on a couple of things: How to keep people in their homes and secondly how to keep people fed," he said. "Because we're going to need everyone here once the economy starts to turn."