In Brazilian Amazon, a 1,000-mile voyage so people can vote 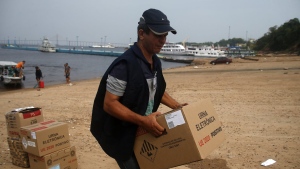 An electoral worker carries an electronic voting machine to be taken by boat to a voting center ahead of tomorrow's elections at the Sao Raimundo port, Manaus, Amazonas state, Brazil, Saturday, Oct.1, 2022. (AP Photo/Edmar Barros)

MANAUS, Brazil (AP) - In most democracies, citizens go to the polls. But in Brazil's sparsely populated Amazon region, the polls often go to the voters.

Most people in the vast rainforest live in urban areas, but thousands reside in tiny villages several days from the nearest city by boat. Amazonas, Brazil's biggest state, is triple the size of California yet has only about one-third the population of greater Los Angeles. More than half its cities can't be reached at all by road, and some are hundreds of kilometers from the state capital, Manaus.

Logistics pose a challenge even in Manaus, a sprawling municipality of 2.2 million people. On Saturday, The Associated Press accompanied election workers setting up a voting place in the Bela Vista do Jaraqui community, a three-hour boat trip from the city.

“No candidate made an appearance here during this campaign,” JoÃ£o Moraes de Souza, a local fisherman and small farmer, told The Associated Press. “If nobody comes during the campaign, you can imagine afterward.”

One of the election workers was Ana Lucia Salazar de Souza. Due to the distance, her team, including police officers, would spend the night in makeshift lodging and return to Manaus on Sunday after voting ends in the afternoon.

“There are many difficulties,” she said. “But participating in this process of citizenship makes all sacrifices worth it.”

Collecting votes in Amazonas' remote Javari Valley region is even more fraught - but less so in recent years thanks to the efforts of Bruno Pereira, the Indigenous expert slain this year alongside British journalist Dom Phillips.

Until 2012, the region's only voting centers were in the city of Atalaia do Norte. That year, a mayoral candidate distributed gasoline to about 1,200 Indigenous people from the Javari Valley Indigenous Territory so they could make the multiday trip downriver to vote.

The candidate hadn't provided enough fuel for their return trip, however. They were stranded on the riverbanks for weeks without proper sanitation, prompting a rotavirus outbreak. Five Kanamari babies died and some 100 people were hospitalized.

At the time, Pereira led the local bureau of Brazil's agency for Indigenous affairs. He provided them with food and water, and coordinated a quarantine to prevent the virus from reaching Indigenous villages. Later, he and local Indigenous leaders developed a plan for transporting electronic voting machines to remote villages.

Villages in the Javari Valley territory received their first voting centers in 2014. To deliver a voting machine to the most distant village, Vida Nova, election officials usually fly in a small plane from Manaus to Cruzeiro do Sul, a city in Acre state. There, they board a helicopter for the final leg. It is a 1,000-mile round-trip voyage to reach a place with 327 voters, in a nation with an electorate of more than 150 million people.

But in a democracy, every vote counts - underscored by latest opinion polls indicating former President Luiz Inacio Lula da Silva just might squeak out a first-round victory, without an Oct. 30 runoff against incumbent Jair Bolsonaro.

This year, the Javari Valley territory has seven voting centers, for 1,655 Indigenous voters. In August, the regional election authority building in Atalaia do Norte was renamed for Bruno Pereira. ---