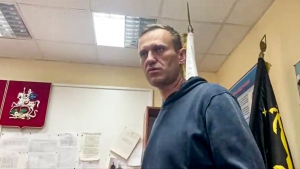 In this image taken from video released by @Kira_Yarmysh, Russian opposition leader Alexei Navalny gestures as he waits for a court hearing in a police station in Khimki, outside in Moscow, Russia, Monday, Jan. 18, 2021. Russian opposition leader Alexei Navalny's arrest as he arrived in Moscow after recovering from his poisoning with a nerve agent has drawn widespread criticism from Western nations. (@Kira_Yarmysh via AP)

MOSCOW -- Authorities in Russia have taken elaborate measures to curb protests against the jailing of opposition leader Alexei Navalny, planned by his supporters for Saturday in more than 60 Russian cities.

Navalny's associates in Moscow and other regions have been detained in the lead-up to the rallies. Opposition supporters and independent journalists have been approached by police officers with official warnings against protesting.

Universities and colleges in different Russian regions have urged students not to attend rallies, with some saying students may be subject to disciplinary action, including expulsion.

Kremlin spokesman Dmitry Peskov said Friday that "it is only natural that there are warnings ... about the possible consequences related to noncompliance with the law" since there are calls for "unauthorized, unlawful events."

Navalny, an anti-corruption campaigner and Kremlin's fiercest critic, was arrested Sunday when he returned to Russia from Germany, where he had spent nearly five months recovering from nerve-agent poisoning that he blames on the Kremlin. On Monday, a judge ordered Navalny jailed for 30 days.

He faces a years-long prison term -- authorities accused him of violating the terms of a suspended sentence in a 2014 conviction for financial misdeeds, including when he was convalescing in Germany.

Navalny's supporters have called for nationwide demonstrations on Saturday to pressure the government into releasing the politician, but have come under pressure themselves.

On Thursday evening, police in Moscow detained three top associates of Navalny. On Friday, his spokeswoman Kira Yarmysh was ordered to spend nine days in jail, and Georgy Alburov was jailed for 10 days. Navalny's close ally Lyubov Sobol was released Thursday night, but ordered by a court on Friday to pay a fine equivalent to $3,300. All three have been charged with inciting unauthorized protests.

More than a dozen activists and Navalny allies in several Russian regions have been detained as well.

Russia's Prosecutor General's office and police have issued public warnings against attending or calling for unauthorized rallies. The prosecutors have also demanded Roskomnadzor, Russia's media and internet watchdog, to restrict access to websites containing calls to protest on Saturday.

On Friday, Russia's largest social network VKontakte blocked all the pages dedicated to the rallies.

Roskomnadzor also announced that it would fine social media companies for encouraging minors to participate in the protests. The move came amid media reports of calls for demonstrations -- and videos of school students replacing portraits of President Vladimir Putin in their classrooms with that of Navalny -- going viral among teenagers on social network TikTok.

Russia's Education Ministry has issued a statement urging parents to "shield" their children from the events on Saturday, stating that "no one has the right to drag young people into various political actions and provocations."

Navalny's allies tell supporters not to get discouraged and show up on Saturday.

"Don't be afraid. Leave it to the Kremlin. We're in the right, and we're the majority," Lyubov Sobol wrote in a Facebook post.

Dozens of influential Russians, including actors, musicians, journalists, writers, athletes and popular bloggers, have come out with statements in support of Navalny, and some promised to attend the demonstrations.