India increases clampdown in parts of Kashmir ahead of anniversary 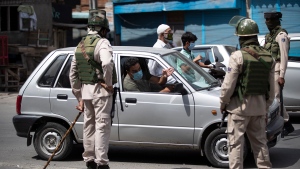 A Kashmiri man asks for permission to proceed to buy medicines during curfew in Srinagar, Indian controlled Kashmir, Tuesday, Aug. 4, 2020. Authorities clamped a curfew in many parts of Indian-controlled Kashmir on Tuesday, a day ahead of the first anniversary of India’s controversial decision to revoke the disputed region’s semi-autonomy. Shahid Iqbal Choudhary, a civil administrator, said the security lockdown was clamped in the region’s main city of Srinagar in view of information about protests planned by anti-India groups to mark Aug. 5 as “black day." (AP Photo/Mukhtar Khan)

SRINAGAR, India -- Authorities imposed a curfew in many parts of Indian-controlled Kashmir on Tuesday, a day ahead of the first anniversary of India's decision to revoke the disputed region's semi-autonomy.

Shahid Iqbal Choudhary, a civil administrator, said the security lockdown was imposed in the region's main city of Srinagar because of information about protests planned by anti-India groups to mark Aug. 5 as “Black Day.”

The curfew will be enforced Tuesday and Wednesday, Choudhary said in a government order.

Scores of young men have been detained in the last few days in anticipation that they would organize anti-India protests in the region, a police officer said on condition of anonymity in keeping with department policy.

“A series of inputs have been received suggesting that separatist and Pakistan-sponsored groups are planning to observe Aug. 5 as Black Day and violent action or protests are not ruled out,” he said.

Last year on Aug. 5, India's Hindu-nationalist-led government of Prime Minister Narendra Modi stripped Jammu-Kashmir of its statehood and divided it into two federally governed territories. Since then, New Delhi has brought in a slew of new laws that residents say are aimed at shifting the demographics in the Muslim-majority region, where many want independence from India or unification with Pakistan.

The status of Kashmir has been a key dispute between Pakistan and India since the two split after the end of British colonial rule. They each control part of Kashmir and have fought two wars over its status.

Initially, the anti-India movement in the Indian-controlled portion of Kashmir was largely peaceful, but after a series of political blunders, broken promises and a crackdown on dissent, Kashmiris launched a full-blown armed revolt in 1989.

Following the Aug. 5 move, Indian authorities enforced an information blackout and a harsh security clampdown in Kashmir for months. Thousands of Kashmiri youth, pro-freedom leaders and politicians who have traditionally supported Indian rule were arrested. Hundreds are still incarcerated.

As some of the restrictions were eased, India enforced another harsh lockdown in March to combat the spread of the coronavirus, deepening the social and economic crises in the restive region.

Human Rights Watch asked that India reverse its “abusive policies” in the region and said it was dismayed that New Delhi persisted with “its repression of Kashmiri Muslims” despite the pandemic forcing the world to address discrimination and inequality.

“Indian government claims that it was determined to improve Kashmiri lives ring hollow one year after the revocation of Jammu and Kashmir's constitutional status,” Meenakshi Ganguly, the New York-based rights group's South Asia director, said in a statement Tuesday. “The authorities instead have maintained stifling restraints on Kashmiris in violation of their basic rights.”

Also on Tuesday, Pakistan's prime minister unveiled a new national map that includes Indian-controlled Kashmir and Junagadh, part of the western Indian state of Gujrat, into the Muslim country's boundaries for the first time in 70 years.

In the new map, the status of Kashmir is changed from a disputed territory to “Indian illegally occupied” Jammu-Kashmir, awaiting final status to be decided by United Nations resolutions.

Prime Minister Imran Khan said the international community had promised to give the right of self-determination to Kashmiri people, but this promise was still to be honoured.

“Pakistan has always thought that Kashmir should be a part of the country,” he said, adding that the redrawing of the map was a “first step” in that direction.

Many Kashmiris seek a united Kashmir independent of either Pakistan or India.

The Pakistani move was mostly symbolic, highlighting the ongoing rivalry between the two nuclear-armed neighbours.

India responded by calling the map “an exercise in political absurdity” that lays “untenable claims” to Indian territory.

“These ridiculous assertions have neither legal validity nor international credibility. In fact, this new effort only confirms the reality of Pakistan's obsession with territorial aggrandizement supported by cross-border terrorism.,” India's foreign ministry said in a statement late Tuesday.

Meanwhile, the president of the Pakistani-controlled portion of Kashmir urged the international community to save Kashmiri people from what he described as “imperialism” and said Kashmiris were being made homeless in their own homeland.

Sardar Masood Khan commented in a video message on Tuesday, a day after Pakistani Foreign Minister Shah Mahmood Qureshi and Defence Minister Pervez Khattak visited a frontier village along the Line of Control that divides Kashmir between India and Pakistan.

Indian and Pakistani soldiers have traded near-daily gunfire along the highly militarized line for over a year, killing dozens of civilians and soldiers on both sides. Each has accused the other of violating their 2003 cease-fire accord.

The rival troops again attacked each other's positions along the de facto frontier early Tuesday and blamed each other for initiating the skirmishes.

Pakistani officials said at least 11 people were wounded in the Indian firing in Tattapani village. The Indian military said its soldiers responded to the Pakistani shelling and reported no casualties.