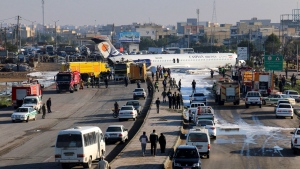 An Iranian passenger plane sits on a road outside Mahshahr airport after skidding off the runway, in southwestern city of Mahshahr, Iran, Monday, Jan. 27, 2020. An Iranian passenger airliner carrying some 150 passengers skidded off the runway and into a street next to the airport in the southern city of Mahshahr on Monday, after apparently losing its landing gear in a hard landing. (Mohammad Zarei/ISNA via AP)

TEHRAN, Iran -- An aging Iranian passenger airliner carrying 144 people crash-landed on a runway and skidded onto a major highway next to an airport Monday, the latest crash in the Islamic Republic as U.S. sanctions bar it from parts or new aircraft.

Passengers, apparently in shock, calmly exited the aircraft with their carry-on baggage out of a door near the cockpit and another over the plane's wing, video from Iran's Civil Aviation Network News showed. A flight attendant shouted at passengers to calmly walk away as another crew member joined her on the wing.

“We crashed. We crashed but we are unhurt,” a male passenger said in Farsi in the video. “My hand is shaking.”

Provincial airport director Mohammad Reza Rezanian said all of the passengers had been safely taken off the plane, which had been flying a route from the Iranian capital, Tehran, some 610 kilometres (380 miles) northeast of Mahshahr. The plane carried 136 passengers and eight crew members, authorities said.

It seems that tragedy was narrowly avoided, however, as images from the scene showed the plane had ground to a halt not far from a populated area. The plane also missed traffic on a major highway linking Mahshahr to Imam Khomeini Port.

Iranian state television said the plane involved in Monday's crash-landing came in harder than usual and lost its landing gear as it hit the tarmac.

No landing gear could be seen in pictures of the plane after the crash, but it was not immediately clear if it failed to deploy or somehow collapsed as the jet hit runway at about 7:35 a.m. local time. The accident is under investigation, officials said.

The McDonnell Douglas MD-83, a single-aisle workhorse introduced in the mid-1980s, largely has been phased out of commercial air travel in the West. American Airlines retired the last of its MD-80 fleet in September.

The plane involved in Monday's crash-landing in Iran, registered as EP-CPZ, was more than 25 years old. It had flown for airlines in France, Canada, the U.S., Colombia, Burkina Faso and Ukraine before being registered to Caspian Airlines in August 2012.

The incident comes as Iran is still coping with the aftermath of the accidental downing of a Ukrainian airliner over Tehran. The plane was shot down by the Revolutionary Guard earlier this month amid heightened tensions with the United States, killing all 176 people aboard.

Maintenance information regarding the American-built MD-83 that crashed Monday was not immediately available. However, Iran has struggled to obtain parts for its aging fleet of airliners amid sanctions by the U.S.

Under its 2015 nuclear deal with world powers, Iran could purchase new aircraft and had lined up tens of billions of dollars in deals with Airbus and Boeing Co., which owns McDonnell Douglas. However, the manufacturers backed away under increasing pressure by President Donald Trump, who ultimately withdrew the U.S. from the nuclear deal in May 2018 and increased tensions with Tehran.

Iran has suffered a series of major aviation disasters in recent decades as its fleet aged. That includes the 2009 crash of a Soviet-era Tupolev Tu-154M flown by Caspian Airlines that took off from Tehran heading to Armenia. Investigators believe an engine failure in plane's tail caused pilots to lose control and smash into the ground at a high speed, killing all 168 people on board.

The U.S. Treasury in 2014 separately sanctioned Caspian Airlines, accusing it of transporting paramilitary troops and weapons of the Guard from Iran to Syria to support embattled President Bashar Assad in his country's grinding, years-long war.

Prior to the shootdown this month, Iran's last fatal crash happened in January 2019, when a decades-old Iranian Boeing 707 military cargo plane reportedly carrying meat from Kyrgyzstan crashed while trying to land west of Iran's capital, killing 15 people on board and leaving a sole survivor.