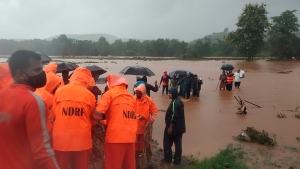 More than 1,000 people trapped by floodwaters have been rescued.

The dead were killed in three landslides Thursday in western Maharashtra state.

Many of those who were rescued were stranded on rooftops and even on top of buses on highways.

An official says the rains have slowed and water levels are declining Friday, making it easier for rescuers to reach the area. Disasters caused by landslides and flooding are common in India during the June-September monsoon season.