Leaders back Navy firing of ship captain; sailors cheer him 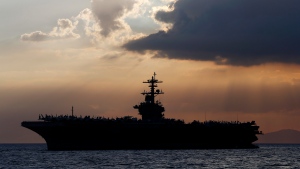 In this April 13, 2018, file photo the USS Theodore Roosevelt aircraft carrier is anchored off Manila Bay west of Manila, Philippines. The captain of the U.S. Navy aircraft carrier facing a growing outbreak of the coronavirus is asking for permission to isolate the bulk of his roughly 5,000 crew members on shore, which would take the warship out of duty in an effort to save lives. The ship is docked in Guam (AP Photo/Bullit Marquez, File)

WASHINGTON - U.S. defence leaders are backing the Navy's decision to fire the ship captain who sought help for his cornonavirus-stricken aircraft carrier, even as videos showed sailors cheering him as he walked off the vessel.

Videos went viral on social media Friday, showing hundreds of sailors gathered on the ship chanting and applauding Navy Capt. Brett Crozier as he walked down the ramp, turned, saluted, waved and got into a waiting car.

Acting Navy Secretary Thomas Modly abruptly fired Crozier on Thursday, saying the commander created a panic by widely distributing a memo detailing the escalating virus outbreak on his ship and pleading his leadership for help. Modly said Crozier “demonstrated extremely poor judgment” in the middle of a crisis.

The ship is docked in Guam, and so far 137 of the nearly 5,000 sailors on board have tested positive for the virus. The Navy has said as many as 3,000 will be taken off the ship and quarantined by Friday evening to stem the spread of the virus. Crew members are needed to remain on the shop to maintain critical systems and protecting the carrier.

And Army Gen. Mark Milley, chairman of the Joint Chiefs of Staff told FoxNews that he trusted Modly's judgement. He said it was a difficult decision, and that Modly is accountable to the American people for it.

Crozier, in his memo, warned of a growing outbreak of the coronavirus on the ship and asked for permission to isolate the bulk of his crew members on shore, an extraordinary move to take a carrier out of duty in an effort to save lives.

And he said that if commanders didn't act quickly, they would be “failing to properly take care of our most trusted asset, our sailors.”

Videos posted online showed sailors chanting Crozier's name and applauding him as he left the ship.

A number of lawmakers have questioned the firing as too hasty a decision.

Hoffman said that 41 per cent of the sailors on the ship have been tested, and results are still coming in. He said no sailors are hospitalized.