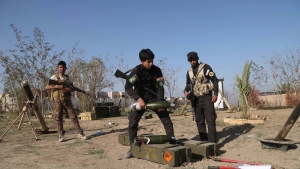 In this March 15, 2015 file photo, young Shiite volunteer militia members prepare to attack Islamic State fighters in Tikrit, north of Baghdad, Iraq. From Lebanon and Syria to Iraq, Yemen, and the Gaza Strip, Iran has significantly expanded its footprint over the past decade, finding and developing powerful allies in conflict-ravaged countries across the Middle East. Iran has trained, financed, and equipped Shiite militias in Iraq that battled U.S. forces in the years after the 2003 invasion and remobilized to battle the Islamic State group a decade later. (AP Photo/Khalid Mohammed, File)

BAGHDAD -- Hundreds of pages of purported Iranian intelligence documents have come to light that detail Iran's massive influence in neighbouring Iraq, The New York Times and The Intercept reported on Monday.

The unprecedented leak of 700 pages of what appears to be Iranian intelligence cables shows Tehran's efforts to embed itself in Iraq and co-opt the country's leaders, including paying Iraqi agents working for the United States to switch sides and infiltrate every aspect of Iraq's political, economic and religious life, the news organizations said in a joint article.

The report named former Prime Minister Haidar al-Abadi as an official who was willing to have a relationship with Iranian intelligence and detailed a January 2015 meeting with an operative. Abadi denied the meeting took place in a statement Monday.

“We categorically deny the occurrence of such a meeting,” said a statement from Abadi's office, adding that such a meeting does not exist in the former prime minister's schedule.

The cables, written mainly in 2014-2015 at the height of the war against the Islamic State group after it seized large swathes of Iraq and neighbouring Syria, show heavy interference by Tehran to keep Baghdad a pliant client state.

Monday's article about the documents comes amid growing anti-Iran sentiment expressed by Iraqi anti-government protesters who have been revolting in the streets since Oct. 1.

The protests in Iraq have exposed long-simmering resentment at Iran's influence in the country, with protesters targeting Shiite political parties and militias with close ties to Tehran.

The leak also comes at a time of widespread anti-government protests in Iran itself after the government's decision to raise gasoline prices by 50%.

There was no immediate comment from Iraqi or Iranian officials.

In Iraq's Tahrir Square, a protester said the article was being translated for protesters by English-speaking volunteers.

“Most of us were not surprised by what we read in the report. It was just a confirmation of our case and the information we already had,” one protester said, speaking on condition of anonymity, fearing retaliation.