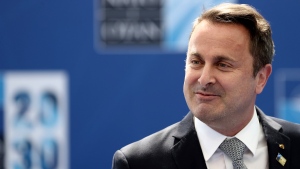 BRUSSELS (AP) -- Xavier Bettel is a jaunty, sharply-dressed man with a keen sense of humor who leads one of Europe's smallest but richest countries. But on Thursday, Luxembourg's first openly gay prime minister looked deflated and disappointed.

Not for the first time, Bettel felt compelled to speak out in public about his sexuality. This time because of a new law in Hungary that bans the sharing of content about LGBT issues with minors. Hungary says the law protects children. Critics say it links homosexuality with pedophilia.

"Being gay is not a choice. You know, I did not just wake up one day after watching some advertising or Modern Family and just become gay. That is not how life is. Life is… it is in me. It is not something I chose," Bettel said, ahead of a European Union summit.

"Accepting yourself is already very hard, so being stigmatized is… it is very far reaching," said Bettel, before he was due to come face to face with the driving force behind the bill, Hungarian Prime Minister Viktor Orban, around the EU's top table in Brussels.

The parliamentary bill was signed into law on Wednesday by Hungarian President Janos Ader. Widely condemned by human rights groups, it prohibits sharing content on homosexuality or sex reassignment to people under 18 in school sex education programs, films or advertisements.

Bettel, who married his husband six years ago, believes that's out of touch with reality.

"The most difficult thing for me was to accept myself when I realized that I was in love with this person of my sex, it was hard to say to my parents, hard to say to my family," Bettel said. "I see how many young people kill themselves because they do not accept that."

Bettel complained bitterly about the mixing of "pedophilia, of homosexuality, of pornography."

Arriving at the summit, Orban ruled out withdrawing the law. He said it had already been "published" and defended himself as a champion of gay rights.

"I (was) a freedom fighter in the Communist regime. Homosexuality was punished and I fought for their freedom and their rights. I am defending the rights of homosexual guys. But this law is not about them, it's about the rights of the kids and the parents," Orban said.

"Things need to be said. I used to have respect for Mr Orban," Bettel said. He said that joining the EU is not a one-way street. "Europe is not just about laws and subsidies, it's also about rights and obligations."

It's not the first time Luxembourg's premier has taken a stand. At an EU-Arab League summit in Egypt in 2019, Bettel told Arab leaders that he was married to a man and would probably face capital punishment in many of their countries.

"Saying nothing was not an option for me," Bettel wrote later in a tweet.