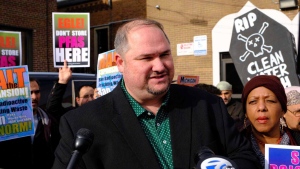 In this Dec. 27, 2019, photo, State Reps. Isaac Robinson and Cynthia A. Johnson, D-Detroit, protest with community members in Detroit over the expansion of a treatment center in Hamtramck. First-term Michigan State Rep. Robinson died Sunday, March 29, 2020, according to this mother, who said she suspects her son's death could be related to the coronavirus. He was 44. (Sarah Rahal/Detroit News via AP)

State Rep. Isaac Robinson was devoted to politics and Detroit, battling for decades on behalf of the city's underdogs until succumbing to its latest scourge: the coronavirus.

The 44-year-old lawmaker was midway through his first term in the Michigan House when he died Sunday, hours after checking into Detroit Medical Center. But he was hardly a newcomer to public service.

The son of a state legislator, he ran campaigns, worked for the late Rep. John Conyers and served as political director of a Teamsters local union. A lawyer, devout Catholic and staunch progressive, he cheerfully championed long-shot causes and people without wealth or power, family and friends said.

"He'd look out for the normal, common guy," said Meeko Williams, director of Hydrate Detroit, a non-profit organization that helps residents who lose water service because of unpaid bills. "He had a big heart. You could call on him and you knew he would help you."

His death came as a shock, even in a city that's become one of the U.S. hot spots for the coronavirus. With 1,801 cases and 52 deaths, Detroit accounts for more than 25% of Michigan's total COVID-19 cases.

State Attorney General Dana Nessel said in a tweet: "There has never been a greater prince of a man than Isaac. No one who worked harder or loved his community more. No better person who has walked this earth."

A husky man who stood about 6-foot-5, Robinson was more comfortable in Detroit's nightclubs, union halls and neighbourhoods than the floor of the state House, where he chafed at the jacket-and-necktie dress code.

"The moment he left the floor, that tie was coming off," said state Rep. Tyrone Carter, a friend and fellow Detroit Democrat.

When another colleague remarked on Robinson's sometimes rumpled appearance, Carter likened him to Columbo, the scruffy but sharp detective in the long-running television series of the same name.

"I said, `You don't underestimate my man,"' Carter said. "The guy's brilliant."

Robinson was born in 1975, when his mother, Rose Mary Robinson, was a Wayne County commissioner. He took an interest in her work as a child.

"He was always in the office, hanging around with me," Robinson's mother said during an emotional telephone interview Monday. "He enjoyed going with me to visit constituents. He was my youngest, my baby, so I'd drag him along."

He attended the University of Michigan and earned a law degree from Northwestern University before returning to Detroit. He delved into retail politics -- fighting against foreclosures, water shutoffs and former Gov. Rick Snyder's appointment of an emergency manager for the city.

"Every little nook and cranny, every little joint on the East Side, every neighbourhood bar, that whole subculture, he loved it all," she said.

Rose Mary Robinson had been out of politics for nearly 30 years when her son persuaded her to run for the city's charter commission in 2009 and managed her successful campaign. In 2012, at his urging, she took aim at the Legislature.

"Here I am, an old woman, 73 years old, and I'm going to run for office?" she said. "But he would go with me on the campaign trail, he did all my literature, and he had me looking like I was Wonder Woman."

She won -- and was re-elected twice. When forced to retire in 2018 because of term limits, Isaac Robinson succeeded her.

Despite his short stay, he made his mark in the House, serving on committees dealing with commerce, regulatory reform and tax policy. He arranged for Motown singers to perform at the Capitol in Lansing.

But he was often back in Detroit, meeting with groups representing the handicapped, the homeless and the LGBTQ community, said Carter, whom Robinson often invited to attend. He also campaigned for Democratic presidential hopeful Sen. Bernie Sanders.

In his final days, Robinson was focused on taking care of workers affected by the pandemic, said Ron Bieber, president of the Michigan AFL-CIO.

Yet he shrugged off the breathing difficulties he began experiencing last week, Robinson's mother said. His condition worsened. She finally persuaded him to call an ambulance early Sunday morning.

It was too late.

Although he wasn't tested for coronavirus, doctors said it was the likely cause of death, Rose Mary Robinson said.

While the virus can lead to severe illnesses such as pneumonia and can be fatal, most people experience mild or moderate symptoms, such as a fever and cough.

Carter, who is recovering from the virus, said he knew something was wrong when he texted news of his diagnosis to Robinson last week and got no reply. But he wasn't surprised that his colleague had resisted going to the hospital.

"He was stubborn as hell," Carter said. "He was tireless, the guy you wanted on your team. ... He didn't get married or have kids. He was married to politics."