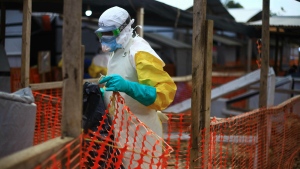 Butembo city's deputy mayor, Patrick Kambale Tsiko, told The Associated Press that the attackers armed with machetes tried to burn down the centre in Katwa district overnight. Military and police guarding the centre killed one militia member and detained five others, he said.

Such violence has deeply complicated efforts to contain what has become the second-deadliest Ebola virus outbreak in history, with the number of new cases jumping each time treatment and prevention work is disrupted.

An attack on Friday on a hospital in Butembo killed an epidemiologist from Cameroon who had been deployed to the outbreak in eastern Congo. Tsiko cited witnesses as saying the attackers wrongly blamed foreigners for bringing the deadly virus to the region.

This outbreak now has more than 1,300 confirmed and probable cases, including 855 deaths, since being declared last August. The number of new cases has risen alarmingly in recent weeks after other attacks, leading the WHO to convene an expert committee that decided the outbreak, while of "deep concern," is not yet a global health emergency .

Both attacks by rebel groups and community resistance have posed serious challenges to containing Ebola, which can spread quickly and can be fatal in up to 90% of cases. Congo's North Kivu region had never faced an outbreak of the hemorrhagic fever before, and health workers have battled misinformation and rumours. Some residents did not believe Ebola was real .

In the hospital attack on Friday, gunmen burst into a conference room and forced people onto the floor, taking their belongings and "accusing them of perpetuating false rumours about Ebola," according to a statement by IMA World Health, a Washington-based aid group that supports the hospital. The gunmen then shot the Cameroonian doctor in the abdomen and left, firing into the air and sending staff and patients fleeing.

Friday's attack was at least the fourth on an IMA World Health-supported facility involved in Ebola response efforts, the statement said. Four days earlier, attackers looted a nearby clinic and briefly kidnapped a nurse. The clinic remains closed.

While the new attack on the treatment centre in Katwa is the first by militia members, it has been attacked a number of times by anxious families who sought to claim the bodies of loved ones who died of the disease.

Ebola is spread by the bodily fluids of those infected and showing symptoms, including the dead, and some residents have bristled at safe burial practices that contradict their traditional, hands-on ones.

Others try to avoid treatment if they fall ill.

"The fear of being forcibly hospitalized adds to the poor public image of Ebola treatment centres," Natalie Roberts, head of emergencies for the medical charity Doctors Without Borders, wrote earlier this month. "These structures are associated with a life-threatening illness, isolation and the use of protective equipment which makes the staff unrecognizable and intimidating."

How to take community concerns into account while effectively containing Ebola remains the subject of debate, while worries are high that the outbreak could spread from the densely populated region to the major crossroads city of Goma or into nearby Uganda or Rwanda.

The latest attacks come a few days after Congo President Felix Tshisekedi visited the Ebola outbreak zone, pledging more military and police protection for health workers and asking residents for their co-operation. The president hoped to see the outbreak contained in less than three months, although some health experts estimate it could take much longer if community resistance continues.