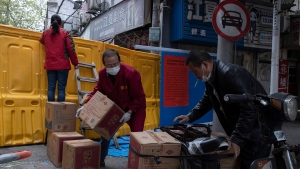 Residents wearing masks to protect against the spread of the coronavirus move goods near barriers sealing off a neighborhood in Wuhan in central China's Hubei province on Friday, April 3, 2020. (AP Photo/Ng Han Guan)

WUHAN, China -- Sidewalk vendors wearing face masks and gloves sold pork, tomatoes, carrots and other vegetables to shoppers Friday in the Chinese city where the coronavirus pandemic began, as workers prepared for a national memorial this weekend for health workers and others who died in the outbreak.

Authorities are easing controls that kept Wuhan's 11 million people at home for two months, but many shops are still closed. Shoppers and sellers in the Minyi neighbourhood on the city's southwest side had to do their business over high yellow barriers, as access to the community is still controlled.

“I don't feel safe going to a supermarket,” said Zhan Zhongwu, who wore two layers of masks and was buying pork for his wife and grandchild. “There are too many people,” he said. “Many infections happened in the supermarket.”

Residents have been relying on online groceries and government-organized food deliveries after most access to the city was suspended Jan. 23 and restaurants, shops and other businesses shut down.

Wuhan and the rest of China are preparing for a nationwide three minutes of silence on Saturday in honour of the 3,322 people who officially died of the virus, including doctors, nurses and other health workers who have been declared martyrs.

They include Li Wenliang, an eye doctor in Wuhan who was reprimanded in December for warning about the virus and later died of the disease. He became a symbol of public anger at the ruling Communist Party for suppressing information about the coronavirus, possibly worsening its spread, before it took action in late January.

The party rescinded Li's reprimand and declared him a hero as part of a propaganda effort aimed at deflecting criticism of the official response.

On Saturday, national flags will be lowered to half-staff at 10 a.m. while air raid sirens and the horns of cars, trains and ships will “wail in grief,” the official Xinhua News Agency said.

People have been told to avoid cemeteries on Saturday, the start of a three-day holiday when families traditionally tend the graves of ancestors.

While the United States and other governments tighten controls and shut down businesses, Chinese leaders are trying to revive the world's second-largest economy after declaring victory over the outbreak.

Still, local authorities have orders to prevent new infections as millions of people stream back to work in factories, offices and shops. Passengers on planes, trains, subways and buses are checked for fever and employers have orders to disinfect workplaces regularly.

Vegetable vendor Xie Lianning said she picked up supplies at a wholesale market at 5 a.m. and drove to Minyi. She was checked for fever at the neighbourhood entrance.

Xie set up shop on a sidewalk in front of closed shops that were covered by roll-down metal doors. The block was surrounded by the head-high yellow barriers installed to keep residents inside during the quarantine.

“Our business is not bad. Here is definitely better than indoors,” said Xie. “Nobody wanted to go inside. People are willing to buy things outside.”

Wuhan accounts for three-quarters of China's virus deaths but has reported no new cases for a week. Despite that, controls requiring official permission to enter or leave the city are to stay in place through Tuesday.

Xie said she still was worried about the virus but had to get back to work.

“We have no choice,” she said. “There are old and young in my family living with us. We have a heavy financial burden.”