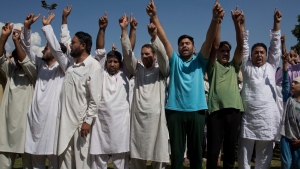 The journalists' leader, Zafeer Baba, said Saturday's protest was an attempt to report on the situation in Kashmir. India has imposed a sweeping media clampdown there since Aug. 5, when it downgraded the autonomy of the portion of Kashmir under its control.

The region has since been under a harsh military curfew, with thousands detained and all communication and the internet cut. Authorities started easing restrictions last Saturday.

Muslim-majority Kashmir is divided between Pakistan and India and is claimed by both in its entirety.

Pakistani police officer Arshad Naqvi said the journalists' vehicles were stopped around seven kilometres (four miles) from the Line of Control, which divides the Himalayan region.