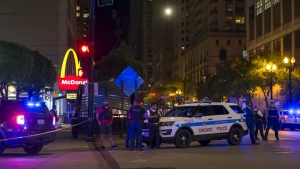 Chicago police work at the scene of a shooting near East Chicago Avenue and North State Street in the Near North Side neighborhood, Thursday, May 19, 2022 in Chicago. (Tyler Pasciak LaRiviere/Chicago Sun-Times via AP)

CHICAGO (AP) — Two people are dead and another eight wounded following a shooting near a fast food restaurant in Chicago that sent bystanders scattering, authorities said.

The shooting happened about 10:40 p.m. Thursday near a McDonald's on the city's Near North Side, a few blocks from the city’s Magnificent Mile shopping district. One person was taken into custody and a weapon was recovered, police said in statement.

Details about what led to the shooting weren't immediately released by police, but a witness, Deonna Jackson, 18, said the shooting appeared to stem from a fight outside the restaurant.

“When the fight first started, we were right next to them,” Deonna Jackson, 18, told the Chicago Sun-Times. ”We had to run because I didn’t want anyone to swing on me.”

The shooting comes amid a surge in deadly violence in the city in recent years. And it follows a deadly shooting last weekend in downtown Chicago’s Millennium Park that killed a teen and led the city to tighten a curfew for young people as part of efforts to curb violence.

As paramedics and officers responded Thursday, a fight erupted between two people across the street from the scene of the shooting, the Chicago Tribune reported, and some people crossed a line of police tape and argued with officers before they were moved away.