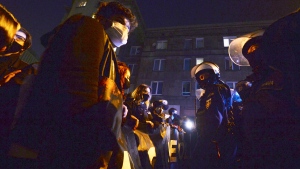 Protesters angry over a new abortion ban face off against police near the parliament in Warsaw, Poland, Wednesday Oct. 28, 2020. People across Poland stayed off their jobs and huge crowds poured onto the streets for a seventh straight day of protests Wednesday, enraged over a top court ruling that bans abortions in cases of fetal abnormalities. (AP Photo/Czarek Sokolowski)

WARSAW, Poland - Polish President Andrzej Duda partially broke ranks with the country's conservative leadership Thursday and said he thinks women should have the right to abortion when they are carrying fetuses with fatal birth defects.

The view Duda expressed during a radio interview runs counter to the one held by senior politicians who pushed successfully for a ban on all abortions due to congenital abnormalities, leading to a week of mass street protests.

“It cannot be that the law requires this kind of heroism from a woman,” Duda said in an interview with radio RMF FM. The president said he still favours outlawing abortion in cases of fetuses with non-lethal congenital defects.

He spoke after seven days of nationwide protests following a court ruling that declared it unconstitutional to terminate a pregnancy due to fetal defects. The ruling effectively bans almost all abortions in a country that already had one of Europe's most restrictive abortion laws.

Deep divisions that had been brewing for a long time in Poland are now erupting on the streets, with young people heeding a call by women's rights activists to defend their freedoms.

Poland's most powerful politician, right-wing ruling party leader Jaroslaw Kaczynski, had called for his supporters to come out to defend churches after protesters disrupted Masses and spray-painted churches on Sunday.

A group guarding a church in the northeastern city of Bialystok held a banner in support of the women but saying their anger should be directed against the government, not churches.

But many interpreted Kaczynski's call as permission for violence against the protesters.

Once the ruling is published and takes effect, abortion only will be legal in Poland when a woman's health or life is in danger or when a pregnancy results from crime like rape or incest.

Duda's comments were in contrast to his initial reaction last week, when he welcomed the court ruling. He spoke Thursday against abortions of fetuses with Down syndrome, which are the majority of legal terminations currently performed in Poland. and called for a new law to distinguish between fatal and non-fatal defects.

“I believe that there should be a regulation which, in case of lethal defects, will unequivocally guarantee the rights on the side of the woman,” the president said.

His words have no legal bearing on the court ruling and are not expected to appease protesters.

Duda also signalled a difference of opinion with Kaczynski on the issue of security, saying police should have the sole responsibility for protecting the streets, not any other uniformed forces.