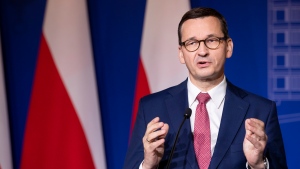 FILE - In this Sept. 17, 2020 file photo, Poland's Prime Minister Mateusz Morawiecki speaks during a news conference following joint meetings of the government of the Lithuania and the government of the Poland at the Palace of the Grand Dukes of Lithuania in Vilnius, Lithuania. An official with Poland's conservative governing party said Friday, Sept. 18, 2020, that the the country's right-wing coalition government has collapsed. (AP Photo/Mindaugas Kulbis, file)

Marek Suski said the Law and Justice party will continue to run Poland as a minority government, without the junior partners that were part of the coalition dubbed the United Right.

"The coalition at the moment does not exist," Suski said. "Our former coalition partners should be packing up their desks."

It was not immediately clear if the announcement of the coalition's collapse was final, or if the threats amounted to a tactical power play. Others used less definitive language.

Ryszard Terlecki, the Law and Justice party leader in parliament, described the coalition as "practically non-existent." He said party leaders would meet Monday to discuss their further steps and that an early election could not be ruled out, if a minority government proves unable to pass legislation.

Law and Justice has been governing with the support of two small parties, one led by the justice minister, Zbigniew Ziobro, since 2015.

The announcement Friday morning came after Ziobro and his party members voted against an animal welfare bill proposed by powerful Law and Justice leader Jaroslaw Kaczynski.

Kaczynski, 71, is a lawmaker in parliament and has no official government role, but he is widely understood to be Poland's dominating political force, deciding government policies and appointments.

The lower house of parliament, or Sejm, approved provisions of the proposed bill that included the prohibition of breeding fur animals and limitations on ritual slaughter.

Law and Justice managed to get the bill passed with the support of opposition lawmakers.

Suski confirmed that Kaczynski told members of Law and Justice's junior partners in a closed-door meeting before the vote that "the tail cannot wag the dog."

Suski said it was important to not accept cruelty to animals, adding "only good people should govern Poland."

Tensions have been building within the coalition for months.

Jaroslaw Gowin, the head of the other small junior party, resigned from his position as deputy prime minister in April in opposition to the government's plan to hold Poland's presidential election on schedule in May despite the coronavirus pandemic.

After much political wrangling, the election was ultimately postponed until the summer.

The strains broke into the open this week as Kaczynski led talks on reshuffling the government with the aim of reducing the number of government ministries for the stated purpose of efficiency.