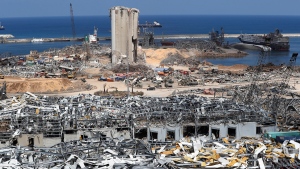 BEIRUT (AP) - The lead judge investigating last year's massive blast in Beirut's port had to suspend his work in the case Monday after a former Cabinet minister demanded his dismissal.

Judge Tarek Bitar, the second judge to lead the complicated investigation, called off questioning of a former military intelligence general, scheduled for Monday, after he was informed of the new legal challenge.

It is now up to the Court of Appeals to decide whether to accept the request from the former interior minister, in which he accuses the judge of bias, or turn it down. The challenge automatically suspends the probe until a decision is reached.

Bitar's removal, if it happens, would likely be the final blow to the investigation, making it highly unlikely that a third judge would take up the job amid threats by members of the country's political elite who have closed ranks in their efforts to block it.

The development comes amid a growing campaign by Lebanon's political class against Bitar, who took over the job in February after his predecessor, Fadi Sawwan, was removed following similar legal challenges by senior officials he had accused of negligence that led to the blast.

Various political leaders have accused Bitar and his predecessor of politicizing the investigation, violating the constitution by ignoring immunity granted to lawmakers and government officials, and by going after some officials and not others.

Later on Monday, Lebanon's new Prime Minister Najib Mikati told private TV station LBC that Bitar has a good reputation but he can't summon officials protected by immunity or ones he didn't question.

“I know that he is a fair and competent judge and can go on but the investigation should be comprehensive,” Mikati said. “How can he charge an official and he did not even question?”

Mikati said security measures have been taken to protect Bitar, following fears the judge's life may be in danger after the repeated criticism of his probe.

On Aug. 4, 2020, hundreds of tons of ammonium nitrate, a highly explosive material used in fertilizers that had been improperly stored in the port for years, exploded, killing at least 214 people, injuring more than 6,000 and devastating nearby neighborhoods.

The attempt to remove Bitar angered families of the victims who have been hoping that the judge would reveal who was responsible for bringing the material to the port and storing it in a port warehouse for years, as well as what caused the explosion described as one of the largest non-nuclear explosions in history.

Many of the families have already demanded an internationally-led probe in the country known for a culture of impunity.

“He was the best hope for Lebanese justice but they are torpedoing everything,” said Mireille Bazergy Khoury, whose son Elias, 15, was killed by the explosion. She said the repeated lawsuits and challenges to the judge prove that those officials are implicated in the explosion.

“I can't find the words to capture how sad and frustrated I am. I feel like every time something like this happens, they kill me once again,” Khoury said. “They killed my son, my daughter was injured, my home was destroyed, my life is in ruins.”

On Friday, former Interior Minister Nouhad Machnouk, who is also a lawmaker, filed a lawsuit to dismiss the judge. Machnouk said Bitar charged him without questioning him, declining to meet him as a witness after the charges were issued. Machnouk argued that Bitar already has a bias.

Ghida Frangieh, a legal expert, said the Court of Appeals has previously rejected similar requests, saying it is not its jurisdiction.

Legislators facing charges are using the appeals court as a stalling tactic until they win back their immunity once parliament goes into session next month, said Frangieh, a lawyer at the Legal Agenda, a Beirut-based human rights group.

“It is a temporary hurdle not a blow,” said Frangieh. “It shows how much this establishment will try to run away from justice.”

None showed up for questioning; the parliament failed to lift the immunity of those summoned - a necessary step before any prosecution. Diab's office and then-interior minister Mohamed Fehmi declined to let Bitar question the heads of two security agencies.