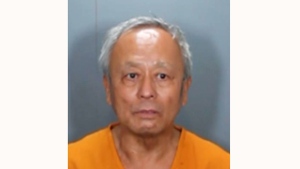 In this photo released Monday, May 16, 2022, by the Orange County Sheriff's Department is David Chou. Authorities said Chou, the gunman in Sunday's deadly attack at a Southern California church, was a Chinese immigrant motivated by hate for Taiwanese people. Chou was booked on one count of murder and five counts of attempted murder. (Orange County Sheriff's Department via AP)

SANTA ANA, Calif. (AP) - The man charged with opening fire on a Taiwanese church congregation of mainly elderly people in Southern California wanted to “execute in cold blood as many people in that room as possible,” a prosecutor said Tuesday in announcing murder, attempted murder and other charges for the shooting that killed one person and wounded five.

Orange County District Attorney Todd Spitzer described David Wenwei Chou, 68, as a monster whose rampage was thwarted by the heroic actions of a doctor who charged at him, a pastor who hit Chou with a chair and several parishioners who tied him up until police arrived.

“This monster crafted a diabolical plan to lock the church doors with his victims inside in order to lead what he thought were innocent lambs to slaughter,” Spitzer said. “But what he didn't realize was the parishioners at the church that day weren't lambs - they were lions and they fought back against the evil that tried to infiltrate their house of worship.”

Spitzer said Chou was motivated by hatred for Taiwan, where he was born after his family was forced from mainland China when Communists prevailed in a civil war that ended in 1949. He apparently chose the church at random and didn't know anyone there, authorities said.

He drove from his home in Las Vegas on Saturday and arrived at the church the next day. Chou spent about an hour mingling with dozens of members of the congregation at a luncheon, which Spitzer said was Chou's way of gaining their trust so they wouldn't notice as he began carrying out his plot - chaining closed doors, super gluing locks and placing incendiary devices in several locations.

Chou's method amounted to “lying in wait,” Spitzer said, a legal designation that can enhance penalties if he is convicted.

“This case is about the person concealing themselves in plain view,” he said.

If Chou is convicted and the jury finds the enhancements to be true, he would face a sentence of either life in prison without possibility of parole or the death penalty, Spitzer said.

Chou's arraignment was continued to June 10 and he did not enter a plea during his first court appearance on Tuesday. He will continue to be held without bail. His public defender, Tania Vallejo, did not immediately return an email requesting comment.

Authorities have said Chou - a U.S. citizen who worked for years as a security guard - was motivated by hatred of Taiwanese people documented in handwritten notes that authorities found. Spitzer said he is considering hate crime charges but needs more time to investigate.

“While there's very strong evidence right now that this was motivated by hate, we want to make sure we have put together all the evidence that confirms that theory in the case,” he said. Federal authorities are conducting their own hate crime investigation.

Tensions between China and Taiwan are at the highest in decades, with Beijing stepping up its military harassment by flying fighter jets toward the self-governing island. China has not ruled out force to reunify with Taiwan.

Chou had ties to a Las Vegas organization opposed to Taiwan's independence from China, according to Taiwanese media.

Balmore Orellana, a former neighbor in Las Vegas, said Chou had been a friendly landlord but his life unraveled after his wife left him last year and returned to Taiwan. Spitzer said the suspect's wife is terminally ill.

Chou moved into a four-bedroom house in February. His roommate, Jordin Davis, said he was a kind and quiet man who often shared his food. Chou identified himself as a Christian and made a cross in black tape on the roof of his car but never talked about religion, Davis said.

The two had few conversations beyond small talk or chatting about Davis' dog, Zeus. Chou would “come home, go to sleep, take a shower, go to work and just repeat that routine all over again,” Davis said.

Chou only spoke about Taiwan once, during a conversation less than two weeks ago, Davis said. Chou said he felt the Taiwanese government was corrupt and disliked how people on the island were sympathetic to the leadership.

“He made himself seem like he was basically a political refugee,” Davis said.

Authorities searched the home on Monday, Davis said, and took a laptop. Officials have said they are investigating electronic records as part of the investigation.

He had two 9 mm handguns - legally purchased years ago in Las Vegas - and three bags, containing four Molotov-cocktail-type incendiary devices and extra ammunition, according to authorities. He opened fire and in the ensuing chaos Dr. John Cheng, 52, tackled him, allowing other parishioners to subdue him and tie him up with an extension cord, the authorities said.

Cheng died and five people were wounded, including an 86-year-old woman and four men ranging from 66 to 92, the sheriff's department said. Some already have been released from the hospital and others were in stable condition, according to the church's former pastor, Billy Chang.

The luncheon came after a morning service to welcome Chang, who had served the church for 20 years. Chang moved back to Taiwan two years ago and this was his first time back.

Chou entered the church sanctuary during services, giving his name to the receptionist as “Da-Wei Chou,” and sat in the back reading one of the church-provided Chinese-language newspapers, according to a church statement issued Tuesday.

He was wearing a black shirt with a word written on it in white that some believed said “Security,” the statement said.

The service was followed by an adult Sunday school session that Chou apparently did not attend, but he showed up later at the lunch, the church said.

Near the end of the lunch, some parishioners took pictures with Chang and started leaving. They saw Chou beginning to lock the doors with iron chains but he allowed them to exit, the church statement said.

“When they asked him about his actions, he refused to answer. They assumed he was a security guard,” the statement said.

One man forgot some things inside the church and wanted to return, but Chou didn't let him into the hall and another church member who was inside said he saw Chou nailing two exit doors shut, the statement said.

In a statement Tuesday recounting the shooting, Chang said he first thought Chou was using a toy gun as a prank when Chou opened fire. When Chang realized it was actual gunfire, he picked up a chair and threw it at Chou, who fell on the floor. Chang rushed at Chou and three other congregation members held Chou down and tied him up.

“It wasn't until then I noticed that Dr. Cheng was lying facedown to my front right with three bloody bullet wounds on the back, not moving,” Chang said.

Authorities have said that Cheng had charged at Chou and disrupted the gunfire. Sheriff Don Barnes on Monday called Cheng's heroism “a meeting of good versus evil” that probably saved the lives “of upwards of dozens of people.”

Cheng, who practiced sports medicine, had recently lost his father and took his mother to the luncheon. He was well known in the community and liked by his patients.