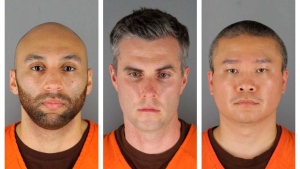 CHICAGO -- As damning as video evidence in the George Floyd case appears to be, prosecutors know they must bring the right charges underpinned by sound legal logic if they hope to convict a Minnesota officer in Floyd's May 25 death.

Exhibit No. 1 at trial is likely to be bystander video showing Officer Derek Chauvin pressing his knee into the back of Floyd's neck as the handcuffed Floyd says he can't breathe. Chauvin held his knee there even after the 46-year-old black man stopped moving.

But strong video evidence doesn't mean a conviction will be easy. When it comes to police officers charged with crimes in the line of duty, it never is.

"This is not a shoo-in," said Mike Brandt, a Minnesota defence attorney. "There are lots of lines prosecutors have to connect. If you raise questions about even one, you could raise reasonable doubts."

Here's a look at some questions and answers about the charges against Chauvin and three other officers, who were all fired:

Q: WHAT ARE THE CHARGES?

Potential sentences for the other officers depend on a conviction of Chauvin. If he's convicted of second-degree murder, they could face the same 40-year maximum.

Q: WHAT ARE THE ELEMENTS OF SECOND-DEGREE MURDER?

A: Under Minnesota law, unintentional second-degree murder involves causing "the death of a human being, without intent ΓÇª while committing or attempting to commit a felony offence."

The second part of that clause is crucial. Prosecutors say Chauvin killed Floyd while committing felony assault on Floyd.

For third-degree murder, prosecutors must demonstrate Chauvin caused Floyd's death by actions "eminently dangerous to others and evincing a depraved mind, without regard for human life."

The complex and some argue poorly defined concept of "evincing a depraved mind" has been the subject of courtroom debate, so it's potentially harder to prove.

A: It's possible, and it's something Floyd's family wants. Minnesota Attorney General Keith Ellison, who is leading the prosecution team, said he's leaving open the possibility of new charges.

But first-degree murder would require a whole new level of evidence. Prosecutors would have to prove premeditation and intent. It would also require a motive.

Brandt said it would be a stretch, adding, "I think it is out of the question."

Q: ARE THERE RISKS OF OVERCHARGING?

A: Yes, especially in cases in which prosecutors face intense public pressure. Jurors may be more likely to acquit or become hopelessly deadlocked in cases where prosecutors bring charges they can't prove.

Q: SO WHAT'S THE CHARGING STRATEGY?

A: Bringing multiple charges against the officers is a way to give jurors a choice. It boosts the chances of a conviction on at least one charge.

Prosecutors know jurors are often torn. They often want to satisfy relatives' desire for justice with a conviction, while also showing some leniency to defendants.

If jurors struggle for a consensus, multiple charges allow for a compromise verdict, with convictions on some charges and acquittals on others.

Q: DID FLOYD POSE A THREAT?

A: A central issue in cases alleging excessive force by police is whether a suspect posed a threat.

The Supreme Court offered guidance in a 1989 ruling, saying an officer's fear is relevant to guilt and that officers "are often forced to make split-second judgments." The reasonableness of an officer's use of force, it said, should be judged "from the perspective of a reasonable officer on the scene, rather than with the 20/20 vision of hindsight."

It will be hard for Chauvin's lawyers to argue their client felt threatened or was forced to make a split-second decision with Floyd handcuffed behind his back, his face pressed into the pavement. In the video, Chauvin appears almost nonchalant, calmly slipping his hand in his pocket at times.

A: Chauvin's attorneys could try to zero in on the cause of Floyd's death, blaming existing health problems, said Brandt.

They may point to the Hennepin County autopsy, which said Floyd died of "cardiopulmonary arrest, complicating law enforcement subdual, restraint, and neck compression." It also noted fentanyl intoxication and recent methamphetamine use, as well as signs of heart disease and hypertension, without listing any of those factors as a cause of death.

A separate autopsy commissioned by Floyd's family concluded he died of asphyxiation due to neck and back compression.

Either way, prosecutors will argue the ultimate cause was Chauvin's actions.

Lawyers for Chauvin and the other officers also are likely to argue that nationwide outrage and protests triggered a rush to judgment.

Q: WHAT ABOUT THE OTHER OFFICERS?

A: Proving charges against them could pose the greater challenge, especially with Thao.

Lane and Kueng allegedly held Floyd's legs as Chauvin pushed on his neck. That could convince jurors they actively contributed to Floyd's death.

Thao, though, was standing several feet away, sometimes with his back turned to his colleagues.

"The mere presence at the scene does not constitute aiding and abetting," said Brandt.

Attorneys for Kueng and Lane have highlighted their clients' status as far junior to Chauvin.

Defence attorney Earl Gray said Lane asked Chauvin, a training officer, if they should turn Floyd over. According to the criminal complaints, Chauvin said no.

Gray said at an initial hearing Wednesday: "What is my client supposed to do other than follow what the training officer said?"