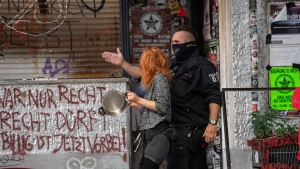 A police officer leads a demonstrator out of the cordoned-off area at the Weisestrasse in Berlin, Germany, where the bar 'Syndicate' is being evacuated on Friday, Aug. 7, 2020. Protesters have erected barricades and set several fires in a bid to stop Berlin police from evicting a left-wing bar that has been the focus of a campaign against gentrification. (Paul Zinken//dpa via AP)

BERLIN -- Hundreds of police faced off against protesters trying to stop the eviction Friday of a left-wing bar that has been the focus of a campaign against gentrification.

Police detained about 40 people after protesters erected barricades and set several fires in an unsuccessful bid to stop bailiffs from entering the Syndikat bar in the capital's Neukoelln district.

A rally Saturday against the eviction turned violent, with police and protesters clashing after officers were pelted with stones and fireworks.

The Syndikat bar has become a symbol for Berlin's anti-gentrification campaigners, who are seeking to have the state buy up properties owned by large landlords.

The property in which the bar is located belongs to a company linked to the London-based Pears family, which operates a global real estate empire.