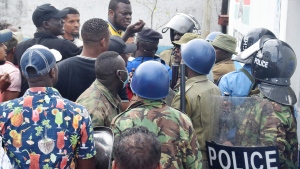 Riot police officers argue with supporters of various political parties as they attempt to force their way into one of the tallying centres in Mombasa, Kenya, Thursday Aug. 11, 2022. Kenyans are waiting for the results of a close presidential election in which the turnout was lower than usual. (AP photo/Gideon Maundu)

NAIROBI, Kenya (AP) -- The head of Kenya's government-created media council says local media outlets haven't been asked to stop their counting of presidential election results after observers noticed a dramatic slowdown in reporting on the close contest and expressed concerns about censorship or meddling.

Media Council of Kenya CEO David Omwoyo told The Associated Press on Friday that “no one has asked anyone to stop,” but added that “we want to align the numbers with each other” and “I think let's peer review our numbers.” He said he was going into a meeting with media leaders as he spoke.

The differing results as media raced to do their tallies led to anxiety among some Kenyans as longtime opposition leader Raila Odinga, backed by former rival and outgoing President Uhuru Kenyatta in his fifth attempt at the presidency, faces Deputy President William Ruto, who fell out with the president years ago.

Kenya could see a runoff presidential election for the first time.

The public posting of results forms was meant to be a groundbreaking exercise in transparency for the electoral commission, which has been under pressure after the high court cited irregularities and overturned the results of the previous presidential election in 2017, a first in Africa. Kenyatta won the new vote after Odinga boycotted it.

But the transparency “is also a double-edged sword if caution and responsibility is not exercised,” the Kenya Human Rights Commission said Friday, saying the various media tallies without explanation have caused “anxiety, fear, unrest and in extreme cases, violence.” Meanwhile, social media is “awash with false information,” it said, dangerous in a country with a history of political violence.

On Wednesday, the media council in a statement noted “growing concerns” about the varying tallies and said it was consulting with media owners and editors “to find an urgent solution to this to ensure Kenyans receive synchronized results.”

“For media to be silent and opaque on their own counts and why they've stopped is yet another betrayal of their duty to Kenyans,” cartoonist and commentator Patrick Gathara tweeted Friday.

Editorial directors with the Citizen and Standard/KTN media houses did not respond to AP questions. The editor of the Nation media group, Mutuma Mathiu, addressed the concerns in a commentary on Friday, saying the slow count has given rise “to a whole raft of conspiracy theories and complaints,” adding that “media occupy different positions in relation to political interests.” He also cited the need to remain independent and do accurate work.

Official results will be announced within a week of the vote, but impatience among some Kenyans is growing. Some have turned to counting a far smaller set of results forms for 291 constituencies also being posted online by the electoral commission. More than 65% of them had been posted Friday morning.

Human rights groups have warned about “rising levels of false or misleading information being shared on social media” as the country awaits the official results.

Turnout dipped sharply in this election, to 65%, as some Kenyans expressed weariness with seeing long-familiar political leaders on the ballot and frustration with economic issues including widespread corruption and rising prices.