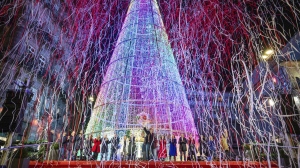 VERONA, Italy (AP) - Early season merrymakers sipping mulled wine and shopping for holiday decorations packed the Verona Christmas market for its inaugural weekend. But beyond the wooden market stalls, the Italian city still has not decked out its granite-clad pedestrian streets with twinkling holiday lights as officials debate how bright to make the season during an energy crisis.

In cities across Europe, officials are wrestling with a choice as energy prices have gone up because of Russia's war in Ukraine: Dim Christmas lighting to send a message of energy conservation and solidarity with citizens squeezed by higher utility bills and inflation, while protecting public coffers. Or let the lights blaze in a message of defiance after two years of pandemic-suppressed Christmas seasons, illuminating cities with holiday cheer that retailers hope will loosen people's purse strings.

“If they take away the lights, they might as well turn off Christmas,” said Estrella Puerto, who sells traditional Spanish mantillas, or women's veils, in a small store in Granada, Spain, and says Christmas decorations draw business.

Fewer lights are sparkling from the centerpiece tree at the famed Strasbourg Christmas market, which attracts 2 million people every year, as the French city seeks to reduce public energy consumption by 10% this year.

From Paris to London, city officials are limiting hours of holiday illumination, and many have switched to more energy-efficient LED lights or renewable energy sources. London's Oxford Street shopping district hopes to cut energy consumption by two-thirds by limiting the illumination of its lights to 3-11 p.m. and installing LED bulbs.

“Ecologically speaking, it's the only real solution,” said Paris resident Marie Breguet, 26, as she strolled the Champs-Elysees, which is being lit up only until 11:45 p.m., instead of 2 a.m. as in Christmases past. “The war and energy squeeze is a reality. No one will be hurt with a little less of the illuminations this year.”

It's lights out along Budapest's Andrassy Avenue, often referred to as Hungary's Champs-Elysees, which officials decided would not be bathed in more than 2 kilometers (1.5 miles) of white lights as in years past. Lighting also is being cut back on city landmarks, including bridges over the Danube River.

“Saving on decorative lighting is about the fact that we are living in times when we need every drop of energy,” said Budapest's deputy mayor, Ambrus Kiss.

He doesn't think economizing on lighting will dissuade tourists from coming to the city, which holds two Christmas markets that attract hundreds of thousands of visitors each year.

“I think it's an overblown debate,” he said.

Festive lights, composed of LEDs this year, also will be dimmed from 1 a.m. to 6 a.m. in the old city center of Brasov in central Romania and switched off elsewhere, officials said.

The crisis, largely spurred by Russia cutting off most natural gas to Europe, is sparking innovation. In the Italian mountain town of Borno, in Lombardy, cyclists on stationary bikes will provide power to the town's Christmas tree by fueling batteries with kinetic energy. Anyone can hop on, and the faster they pedal, the brighter the lights. No holiday lighting will be put up elsewhere in town to raise awareness about energy conservation, officials said.

In Italy, many cities traditionally light Christmas trees in public squares on Dec. 8, the Immaculate Conception holiday, still allowing time to come up with plans for festive street displays. Officials in the northern city of Verona are discussing limiting lighting to just a few key shopping streets and using the savings to help needy families.

“In Verona, the atmosphere is there anyway,” said Giancarlo Peschiera, whose shop selling fur coats overlooks Verona's Piazza Bra, where officials on Saturday lit a huge shooting star arching from the Roman-era Arena amphitheater into the square.

The city also will put up a Christmas tree in the main piazza and a holiday cake maker has erected light-festooned trees in three other spots.

“We can do without the lights. There are the Christmas stalls, and shop windows are decked for the holidays,” Peschiera said.

After two Christmases under COVID-19 restrictions, some are calling “bah humbug” on conservation efforts.

“It's not Christmas all year round,” said Parisian Alice Betout, 39. “Why can't we just enjoy the festive season as normal, and do the (energy) savings the rest of the year?”

The holiday will shine brightly in Germany, where the year-end season is a major boost to retailers and restaurants. Emergency cutbacks announced this fall specifically exempted religious lighting, “in particular Christmas,” even as environmental activists called for restraint.

“Many yards look like something out of an American Christmas film,” grumbled Environmental Action Germany.

In Spain, the northwestern port city of Vigo is not letting the energy crisis get in the way of its tradition of staging the country's most extravagant Christmas light display. Ahead of other cities, Vigo switched on the light show Nov. 19 in what has become a significant tourist attraction.

Despite the central government urging cities to reduce illuminations, this year's installation is made up of 11 million LED lights across more than 400 streets - 30 more than last year and far more than any other Spanish city. In a small contribution to energy savings, they will remain on for one hour less each day.

Caballero says the economic return is vital, both for commerce and for businesses in Vigo. Hotels in the city and the surrounding area were completely full for the launch of the lighting and are expected to be close to 100% every week.

The market exhibitor's association said a family Christmas market visit consumes less energy than staying home. A family of four spending an hour to cook dinner on an electric stove, streaming a two-hour film, running a video console and lighting the kids' rooms would use 0.711 kilowatt-hour per person vs. 0.1 to 0.2 kilowatt-hour per person to stroll a Christmas market.

“If people stay at home, they don't sit in the corner in the dark,” said Frank Hakelberg, managing director of the German Showmen's Association. “The couch potatoes use more energy than when they are out at a Christmas market.”