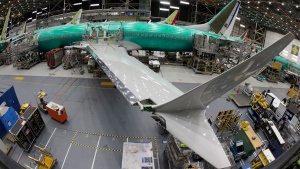 In this March 27, 2019, file photo taken with a fish-eye lens, a Boeing 737 MAX 8 airplane sits on the assembly line during a brief media tour in Boeing's 737 assembly facility in Renton, Wash. (AP Photo/Ted S. Warren, File)

DALLAS - The union president of Southwest Airlines pilots worries that Boeing may be rushing the 737 Max back into service, and he says Southwest should consider buying planes from another company.

The union president, Jon Weaks, says Boeing may be raising the threat of shutting down the Max assembly line to pressure regulators to let the plane fly again soon and force airlines to resume making payments on their Max jets and absorb some costs of getting the planes back in the air.

“Boeing will never, and should not ever, be given the benefit of the doubt again,” Weaks said. “The combination of arrogance, ignorance, and greed should and will haunt Boeing for eternity.”

The president of the flight attendants' union at American Airlines said Thursday that some co-workers are afraid to fly on the Max.

The comments highlight the tension between Boeing and pilots and flight attendants, people that Boeing is counting on to help assure the public that the plane will be safe after changes to flight-control systems that played a role in two crashes that killed 346 people.

In a statement, Boeing Co. said, “We look forward to working with pilots, flight attendants and our airline customers to re-earn their trust. The MAX will only be certified once regulators are completely satisfied that we have made all updates required and they determine the plane is safe to return to service.”

Weaks made the comments in a memo Wednesday to members of the Southwest Airlines Pilots Association, which is already suing Boeing over money that pilots have lost due to flights that were cancelled after the Max was grounded in March.

Patrick O'Rourke, vice-president of the Allied Pilots Association, said his union expects American to make sure that pilots are compensated for lost income from grounded flights. He praised Boeing for letting the union help select pilots to test changes that the manufacturer is making to software on the Max. He said American's target of returning the plane to service on March 5 seems reasonable.

Lori Bassani, the president of the Association of Professional Flight Attendants, wrote to Boeing CEO Dennis Muilenburg two weeks ago and suggested American's 28,000 attendants would refuse to work on the plane until they are convinced it is safe.

“I hear from flight attendants every day, and they are begging me not to make them go back up in that plane,” Bassani told reporters on Thursday. “By the time March comes around, that should change if things are being done right ... they should feel comfortable by then. If they don't, we will take that up at that time with our company.”

Bassani called Boeing an “excellent company” whose success is important to the U.S. economy and especially in Washington state, where she lives and where Boeing has extensive manufacturing operations. “We want them to succeed,” she said, adding in reference to the crashes, “This can't happen again.”

Both American and Southwest has taken Max jets out of their schedules until early March. Southwest's fleet consists entirely of Boeing 737s, most of them earlier versions of the plane. Last month, CEO Gary Kelly said the airline's board has directed him to look into diversifying its fleet, a study he said will probably occur next year.

“I strongly concur with Southwest exploring obtaining a different and perhaps non-Boeing aircraft for the best interest of all our futures,” Weaks told pilots.

Earlier this week, Boeing said it expected to resume deliveries of Max jets in December and get Federal Aviation Administration approval of a new pilot-training program in January, the last major step before airlines could resume flights with the Max.

American and Southwest expect to lose $1 billion between them this year because of the Max grounding. Those airlines and United, the third U.S. carrier that owns Max jets, are discussing compensation with Boeing.