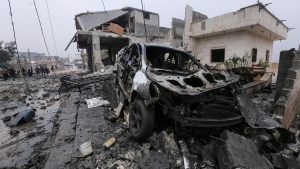 Destruction by an airstrike is seen in the town of al-Jannah, west of Aleppo, Syria, Monday, Jan. 20, 2020. (AP Photo/Ghaith Alsayed)

Over the past two days, Syrian troops captured at least six villages near the strategic town of Maaret al-Numan in the northwestern province of Idlib. That brought them closer to retaking a critical north-south highway that passes through the town. It's been held by the rebels since 2012.

Syrian President Bashar Assad's government has retaken control of most of the country from rebel fighters, largely because of blanket air support from Russia, which helped turn the tide in the nearly 9-year civil war.

Idlib province is dominated by al-Qaida-linked militants. It's also home to 3 million civilians, and the United Nations has warned of the growing risk of a humanitarian catastrophe along the Turkish border. The government offensive in Idlib province has led to the displacement of hundreds of thousands of people, many of them to areas close to the border with Turkey.

Syrian state TV said government forces captured the village of Ghadqa near Maaret al-Numan early Sunday. Among the six nearby villages captured over the past two days were Tel Manas and Maarshamarin, according to the Britain-based Syrian Observatory for Human Rights and state news agency SANA.

Opening the highway would reduce travel time between Damascus and Aleppo by two hours, since drivers now must take a longer desert road.

Also Sunday, a car bomb in the northern town of Azaz killed eight people and wounded over a dozen more, according to SANA, when it went off outside a restaurant. The Observatory gave the death toll at seven people, with more than 20 wounded.

No one claimed responsibility for Sunday's attack in Azaz. Turkey-backed opposition fighters control the town. There have been a series of bombings over the past few months that left scores of people dead.

Turkey invaded the border area in neighbouring Syria to drive away the Syrian Kurdish People's Protection Units, or YPG, because of its alleged links to Kurdish rebels fighting inside Turkey. However, the same fighters were the main U.S. allies on the ground in the war against the Islamic State group.