Bank of Canada raises key rate by half percentage point 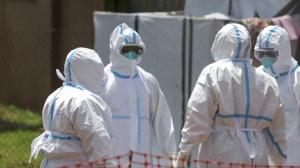 Doctors stand in a circle to say a prayer before entering the Ebola isolation section of Mubende Regional Referral Hospital, in Mubende, Uganda, Thursday, Sept. 29, 2022. In this remote Ugandan community facing its first Ebola outbreak, testing trouble has added to the challenges with symptoms of the Sudan strain of Ebola now circulating being similar to malaria, underscoring the pitfalls health workers face in their response. (AP Photo/Hajarah Nalwadda)

MUBENDE, Uganda (AP) - The nurse wanted the toddler with a high fever transferred at once from a private clinic in Uganda to a public hospital even though the child tested positive for malaria amid an Ebola outbreak that has rattled health workers.

But the clinic's owner wasn't convinced as he examined the boy in his lap. The boy didn't have Ebola, he concluded after looking for the tell-tale bloody signs of the virus, and then sent the patient and his thankful mother home after administering intravenous medication.

The incident underscores the pitfalls health workers face in their response to a new Ebola outbreak in central Uganda. Because some malaria symptoms are similar to those of the Sudan strain of Ebola now circulating in three districts, community-based clinics that are usually the first port of call for those seeking care can be ill-equipped to make the right decisions at the right time.

“You can't say that everyone who is dying is dying of Ebola,” said nurse Edgar Muhindo of Mubende's St. Florence Clinic, which unknowingly treated two Ebola patients for malaria before they sought care elsewhere. “But if it's Ebola, it's important to confirm that it's Ebola. That's why it's important for more health units to have the machines that can detect this Ebola virus.”

Simple microscopes at such remote clinics can quickly confirm malaria or typhoid, possibly obscuring the possibility that the same patient could simultaneously have Ebola.

This was the case with a 24-year-old man who became sick in mid-September, was treated for malaria and pneumonia, and died the day before a sample from him confirmed the Ebola outbreak.

By that time, six others had died from what officials called a strange illness.

Mellon Kyomugisha, a medical lab assistant who recalled touching the first confirmed Ebola victim when he came to St. Florence Clinic with malaria, said she felt it wasn't necessary to isolate until worrisome symptoms emerge. She was at work several days later, putting on protective gear when she had to see a patient.

Thirty-five Ebola cases have been confirmed since Sept. 20, including six health workers, and a doctor is among at least seven confirmed deaths.

Only one government-run facility, located 180 kilometers (111 miles) away in Entebbe, is equipped to test for Ebola, and officials sometimes wait up to 48 hours before results come in.

Ebola, which manifests as a viral hemorrhagic fever, is spread through contact with bodily fluids of an infected person or contaminated materials. Symptoms include fever, vomiting, diarrhea, muscle pain and at times internal and external bleeding.

Scientists don't know the natural reservoir of the virus, but they suspect the first victim in an Ebola outbreak gets infected through contact with an infected animal or eating its raw meat.

Uganda has had multiple Ebola outbreaks, including one in 2000 that killed more than 200. Authorities don't expect the current outbreak to be so deadly but are urging people to immediately report suspected cases. There is no proven vaccine for the Sudan strain of Ebola.

Health authorities are still investigating the source of the current outbreak, which likely began in August, Ugandan President Yoweri Museveni said in a televised address earlier this week. It was a surprising admission for an East African country that's often cited for its leadership in fighting disease outbreaks.

Hamstrung by testing difficulties from the beginning, the initial response was sometimes chaotic as health officials raced to corral contacts and set up an isolation unit, according to health workers and others on the ground.

Some health workers said they felt helpless when ambulances delayed in picking up patients possibly suffering from Ebola. A woman whose farmworker died of Ebola recalled being taken into an isolation unit where some quarantined patients started to bleed, worrying those without symptoms who knew they risked infection.

Health authorities in Mubende have since created separate isolation spaces for Ebola patients and their contacts, said Rosemary Byabasaija, the leader of a government task force fighting Ebola. She said early “disorganization” in case management has since been rectified.

“When the news broke, it caused stampeding both in the hospital and the communities,” she said.

Ugandan authorities had documented 427 known contacts by Friday. But some taken into quarantine escaped and remain at large, complicating the tracing work that's key to preventing a widening outbreak.

“It's like someone throwing a grenade,” Dr. Emmanuel Batiibwe, director of Mubende Hospital, said of the outbreak's early days. “There's that explosion. Everybody scampers for cover and then they begin coming back slowly to see what's going on... So it was a similar scenario which happened here.”

The hospital made “the biggest alarm you can ever think of,” he said, and soon efforts were underway to set up an isolation unit with the help of Doctors Without Borders. That unit was still being set up 10 days after the outbreak had been declared.

Farmer Margaret Nakanyike, one of those herded into the isolation unit after two members of her household showed Ebola signs, said she was lucky to escape infection at the hospital. After testing negative, she is isolating at her house not far from the garden where her worker who died from Ebola was buried.

Across Madudu, the subcounty in Mubende that's been hardest hit, ambulances speed along the dirt road to respond to Ebola alerts.

Kaamu Kato, who runs a government-run health center in Madudu, waited anxiously for an ambulance to take a 16-year-old mother with a baby who had arrived with a fever and bloody diarrhea. She didn't have malaria, so Kato and others immediately Ebola-alerted for an ambulance.

The transport came two hours later. The patient, after trying to leave, lay in the grass, apparently in pain, as health workers watched from a distance. Kato said he could do nothing.

“There are things which are beyond my control,” he said. “I have played my part. It's now up to them to come here quickly or to delay.”