The megarich have already recovered from the pandemic. It may take the poor a decade to do so 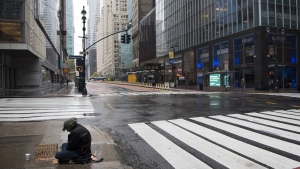 It took the world's top 1,000 billionaires nine months to recoup their fortunes after the coronavirus pandemic hit. This image shows a homeless person sitting in the rain on April 24, 2020 in New York City. (Pablo Monsalve/ViewPress/Getty Images)

Nine months. That's how long it took the world's top 1,000 billionaires to recoup their fortunes after the coronavirus pandemic hit.

More than a decade is how long it could take the world's poorest to recover, according to Oxfam International's annual inequality report.

The report, released on Sunday ahead of the World Economic Forum's virtual meeting of political and financial leaders, typically held in Davos, Switzerland, lays out the virus' disparate impact around the globe. The pandemic could increase economic inequality in almost every country at once, the first time this has happened, Oxfam found.

"We stand to witness the greatest rise in inequality since records began. The deep divide between the rich and poor is proving as deadly as the virus," said Gabriela Bucher, Oxfam's executive director. "Rigged economies are funneling wealth to a rich elite who are riding out the pandemic in luxury, while those on the front line of the pandemic — shop assistants, health care workers, and market vendors — are struggling to pay the bills and put food on the table."

The coronavirus, which has infected nearly 100 million people and killed more than 2.1 million globally, has thrust inequality into the spotlight. How people cope has differed by race, by gender and by income.

For instance, close to 22,000 Black and Hispanic Americans would still be alive, as of December, if these groups died of the virus at the same rate as White Americans, according to Oxfam.

And 112 million fewer women would be at risk of losing income or their jobs if men and women were equally represented in sectors hurt by the pandemic.

Meanwhile, the wealthy are generally weathering the Covid storm quite well. Though stock markets collapsed in the early months of the pandemic, they have roared back — thanks in part to the unprecedented economic assistance provided by governments.

Worldwide, the wealth of billionaires has grown by $3.9 trillion between mid-March and the end of December, Oxfam calculated.

But the number of people living in poverty globally could have increased by up to 500 million last year, according to a UN University World Institute for Development Economics Research paper that Oxfam cited.

Other reports have also found that the pandemic has greatly hurt the poor. A separate World Bank study in October that found the pandemic could push as many as 60 million people into extreme poverty.

To fight this growing inequality, governments should ensure that everyone has access to a Covid-19 vaccine and financial support if they lose their jobs, Bucher said. Also, this is the time for longer-term investments in public services and low-carbon sectors to create millions of jobs and ensure everyone has access to education, health care and social care, she said.

In the US, Oxfam urged Congress to pass an economic recovery plan that invests in green jobs and supports the child care industry, which will help women return to work, and provide more aid in the global fight against the pandemic.

"These measures must not be Band-Aid solutions for desperate times, but a 'new normal' in economies that work for the benefit of all people, not just the privileged few," Bucher said.

President Joe Biden has proposed a $1.9 trillion coronavirus and economic relief package, which contains additional stimulus payments, unemployment benefits and nutrition and housing assistance. He has said he will unveil an economic recovery plan next month.