The U.S. just marked 25 million COVID-19 cases. Now it's a race between vaccines and variants 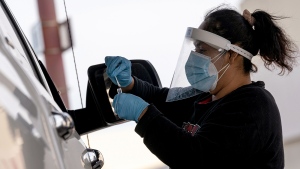 Just over a year since the first reported Covid-19 case in the US, the United States nears 25 million infections. This image shows a healthcare worker running a Covid-19 test inside San Francisco International Airport (SFO) in San Francisco, California, on January 9, 2021. (David Paul Morris/Bloomberg/Getty Images via CNN)

It took just over a year for the US to go from one to 25 million coronavirus infections.

As infections kept soaring this weekend, so did the death toll. As of Sunday, more than 417,000 people have died from COVID-19 in the United States, according to Johns Hopkins University.

The US death toll could reach 569,000 by May 1, according to the University of Washington's Institute for Health Metrics and Evaluation -- even though "42,800 lives will be saved by the projected vaccine rollout."

While some states have reported recent dips in their daily COVID-19 numbers, new coronavirus variants have many scientists worried.

"It is, first of all, good news to see that curve bend down a little. We're still at a very high level of infections," said Dr. Ashish Jha, dean of the Brown University School of Public Health.

"But I am very worried about whether we're going to be able to sustain this or not. If we move quickly on vaccinations...then we can keep that curve heading down. But if the variants take hold first, that curve will turn back up. And things will get much worse," he said.

Fauci: One of the new strains could be deadlier

A coronavirus variant called B.1.1.7, first identified in the United Kingdom, is one of the more concerning strains.

It's been detected in at least 22 US states, according to data posted Friday by the Centers for Disease Control and Prevention.

The CDC has warned this strain appeared to be more easily transmissible and that the US could see "rapid growth" of its spread in early 2021.

A UK report released Friday said there's "a realistic possibility" that B.1.1.7 has a higher death rate than other variants.

"The data is mounting -- and some of it I can't share -- that clearly supports that B.1.1.7 is causing more severe illness and increased death," said Michael Osterholm, director of the Center for Infectious Disease Research and Policy at the University of Minnesota. "Already we know this variant has increased transmission, and so this is more very bad news."

Dr. Anthony Fauci, director of the National Institute of Allergy and Infectious Diseases, said it's certainly possibly this strain could be more harmful.

"We need to assume now that what has been circulating dominantly in the UK does have a certain degree of increase in what we call virulence, namely the power of the virus to cause more damage including death," Fauci said told CBS' "Face the Nation" on Sunday.

He noted that the research is still evolving.

"The data that came out was after they had been saying all along that it did not appear to be more deadly, so that's where we got that information," Fauci said.

The director of the National Institutes of Health, Dr. Francis Collins said Saturday it's still too soon to tell if the B.1.1.7 variant is deadlier, saying the data is "very preliminary."

He added that increased mortality could be a "consequence of the fact that the UK health system is really overwhelmed."

"That has an effect also on mortality," Collins added.

In the US, Washington state health officials said they found the variant in testing samples in the state.

"We're now in that second half of fighting this pandemic," Washington Secretary of Health Umair A. Shah said Saturday.

"It's very important for us to really double down on our efforts to prevent this strain as well as any strain from taking over, because we want to make sure that transmission does not happen in our state and the best way to do that is prevention, prevention, prevention."

The good news? Studies so far suggest vaccines will also protect against the B.1.1.7 variant.

And that the same measures that can help prevent coronavirus infections in the past -- wearing masks, social distancing and frequent hand washing -- also fight against variant strains.

Why a strain first spotted in South Africa is concerning

At least two studies suggest another variant -- this one first detected in South Africa -- might be problematic for vaccines.

In terms of vaccines, Fauci said that variant was "a little bit more concerning" than the B.1.1.7 variant first identified in the UK.

"It looks like it does diminish more ... the efficacy of the vaccine," Fauci told "Face the Nation" Sunday.

"But we're still within that cushion level of the vaccines being efficacious against these mutants."

Fauci said research could evolve, and preparations are already being made for the possibility that vaccines might some day need to be modified or upgraded.

The strain has been found in more than a dozen countries. But so far, it has not been detected in the US, Fauci told "Face the Nation."

"What has been looked at thus far, it has not come up on any of the surveillance," he said. "But we need to expand greatly our genomic surveillance."

21 million vaccine doses administered in US

CDC data shows more than 21.8 million vaccine doses have been administered across the country -- with more than 3.2 million Americans having received both doses.

Fauci said if Johnson & Johnson's vaccine is authorized for emergency use, the US could see a significant boost in available doses by May. That vaccine only requires one dose, instead of the two necessary for the Moderna and the Pfizer/BioNTech vaccines currently being administered.

"I would anticipate that within a period of likely no more than two weeks, that the data will be looked at by the Data and Safety Monitoring Board," Fauci told MSNBC.

If the data is strong enough, the next step would be presenting it to the Food and Drug Administration for an emergency use authorization.

"Let's say they do ... get an EUA in February, by the time they get a meaningful amount of doses, it likely will be a month or two following that," he said. "Once they get going into May, June, July, August, then you're going to see a sharp escalation of additional doses of this one-dose vaccine."

Meanwhile, the FDA also told CNN Saturday that if absolutely necessary, "modest delays" between first and second doses of the current Covid-19 vaccines are not expected to decrease protection against the virus.

The agency said it "recognizes that getting as many people as possible across the country fully immunized will help to curtail the spread of the virus that causes COVID-19 and should be a priority."

Previously, the FDA had warned changes to vaccine schedules without appropriate data could put public health at risk.

The CDC also updated its guidance to say second doses of vaccines may be scheduled up to six weeks after initial doses, if necessary, adding second doses should be administered as close as possible to the recommended interval -- three weeks after the first dose for the Pfizer/BioNTech vaccine and four weeks for the Moderna vaccine.

Dr. Vivek Murthy, President Joe Biden's nominee for US Surgeon General, told ABC's George Stephanopoulos that the goal of 100 million doses in the President's first 100 days in office is "a floor. It's not a ceiling."

Murthy said Biden understands that the larger goal is that "we've got to vaccinate as many Americans as possible. And that's going to take a lot of work, work dispelling misinformation, working on the supply, increasing distribution channels, and that's some of what the vaccine plan that he announced over the last week is intended to achieve."

Murthy also told Stephanopoulos that Biden's goal of opening most elementary schools in his first 100 days would take a lot of work.

"I know how critical it is for schools to get open for parents, for the economy, for all of us," Murthy told Stephanopoulos. "It's going to take a lot of work though."

Schools need clear guidance on how to reopen safely and the resources needed to do it, something many of them don't have, Murthy said.

"If we get them the resources and the guidance, I do think that we can get on a path to reopening schools more safely," he said.

However, it will also take getting the background number of cases in communities down, he said, something which everyone needs to be a part of.

'We truly are in the darkest days'

That all comes as the US continues to fight a brutal battle against the virus.

More than 110,600 Americans are hospitalized with the virus nationwide, according to the COVID Tracking Project.

"While we are seeing some positive data in daily new cases and hospitalizations, we are far from out of the woods," Los Angeles County Public Health Director Barbara Ferrer said.

"It is critically important we slow COVID-19 spread to decompress the strain on our healthcare system and save lives."

In Georgia, one health care official described a grim image of the grip of the virus.

"We truly are in the darkest days of this pandemic," said Dr. Deepak Aggarwal at the Northeast Georgia Medical Center on Saturday night.

"We are seeing more than 200 patients per day now, than we normally see at this time of the year. "

"And also, we're dealing with the increasing number of deaths," Aggarwal said.

"Our system normally deals with less than 10 deaths per month." But by January 21, "we have already had 169 deaths."