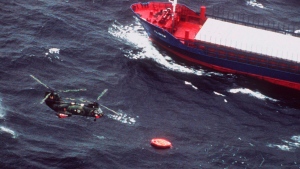 File- In this Sept.28, 1994 file photo, Swedish Marine rescue helicopter flies over the life rafts from the Estonian ferry 'Estonia', that capsized and sank in the Baltic Sea. A Paris court rejected a compensation claim Friday related to the 1994 sinking of an Estonian ferry, which remains one of Europe's deadliest maritime disasters. (AP Photo/Esa Pyysalo, File)

STOCKHOLM -- The governments of Sweden, Finland and Estonia said Monday they will jointly assess what that they called “new significant information” in connection with one of Europe's deadliest peacetime maritime disasters, the sinking of a ferry in the Baltic Sea in 1994 that killed 852 people.

A television documentary aired to coincide with the 26th anniversary of the sinking of the M/S Estonia includes video images from the wreck site showing a hole in the hull measuring 4 metres (13 feet) on the starboard side.

However, the three countries said that they “rely on final conclusions” of a 1997 report that concluded that the ferry sank after the bow door locks failed in a storm. It flatly rejected the theory of a hole, which has long been the focus of speculation about a possible explosion on board.

“It cannot be ruled out that the damage was important for the sinking process,” Joergen Amdahl, professor of marine technology in Trondheim, said in the five-episode documentary to be aired Monday.

Margus Kurm, the former head of the Estonian government's investigative group, said in a television interview that the ship most likely sank after a collision with a submarine.

“Considering that the hole is below the water line and considering no one has ever mentioned that another ship could have sunk Estonia and none of the survivors have said they saw a ship close to Estonia, the most likely cause is (the ferry) collided with a submarine,” Kurm told Estonian television.

He ruled out that a fishing boat could have created the hole, telling the daily Postimees that the Estonia “collided with something big enough to pierce the hull.”

Ann Linde, Pekka Haavisto and Urmas Reinsalu - the foreign ministers of Sweden, Finland and Estonia - said in a joint statement that they ”have agreed that verification of the new information presented in the documentary will be made in accordance and full respect” of a 1995 agreement to protect the wreck as a final place of rest for victims of the disaster.

Some 758 bodies remain entombed on the car ferry, which rests on the seabed 80 metres (265 feet) below the surface. The wreck is considered a graveyard, which gives the area protection under the law, and the agreement criminalized activities that would disturb it. However, Finnish and Swedish coast guards cannot stop any diving endeavour because the wreck lies in international waters.

Last year, the production team behind the documentary sent an underwater robot to film the wreck. Jessica Linnman, head of communications for Discovery Sweden, said “the film crew found that it was journalistically justified to dive to the wreck using a robot.”

“The case is of great public interest and this was the only way for the production to determine if the official statement available today is credible, or if there are circumstances that have not been revealed to the public,” she said.

Jan M. Olsen in Copenhagen, Denmark, contributed to this report.