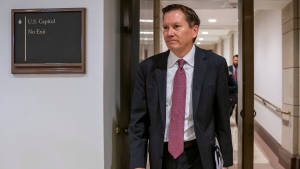 In this Oct. 4, 2019, file photo, Michael Atkinson, the inspector general of the intelligence community, arrives at the Capitol in Washington for closed-door questioning about a whistleblower complaint that triggered President Donald Trump's impeachment. Trump has fired Atkinson. Trump informed the Senate intelligence committee Friday, April 3, 2020, of his decision to fire Atkinson, according to a letter obtained by The Associated Press. (AP Photo/J. Scott Applewhite, File)

WASHINGTON - President Donald Trump on Saturday criticized the ousted inspector general who handled an anonymous whistleblower's complaint that sparked his impeachment as a “disgrace” and suggested that the independent watchdog should have discussed the complaint with him.

Trump informed Congress late Friday night that he was firing Michael Atkinson, saying in letters to the House and Senate intelligence committees that he had lost confidence in Atkinson. Atkinson's removal is part of a larger shakeup of the intelligence community under Trump, who has always viewed intelligence professionals with skepticism.

Trump's criticism Saturday came after Atkinson's peers had rushed to his defence. Michael Horowitz, the inspector general at the Justice Department, said Atkinson was known for his “integrity, professionalism, and commitment to the rule of law and independent oversight.” He said that includes Atkinson's actions in handling the Ukraine whistleblower complaint.

Asked during the daily coronavirus briefing about firing Atkinson, Trump returned to his attacks on the Democratic-led impeachment investigation and trial and his defence that his phone call with Ukraine's president was “perfect” but had been inaccurately described in the whistleblower's account. In fact, the partial transcript later released by the president largely supported the whistleblower's account.

“I thought he did a terrible job, absolutely terrible,” Trump said of Atkinson, though he did not use his name while discussing the firing. The president added: “He took a fake report and he took it to Congress with an emergency, OK? Not a big Trump fan, that I can tell you.”

Trump also questioned why Atkinson didn't speak to him about the complaint, though Atkinson's role is to provide independent oversight.

“Never came in to see me, never requested to see me,” Trump said. He added: “That man is a disgrace to IGs.”

Atkinson is at least the seventh intelligence official to be fired, ousted or moved aside since last summer. The intelligence community has been in turmoil because of the constant turnover.

Trump informed the House and Senate intelligence committees late Friday of his decision to fire Atkinson. Democrats reacted swiftly, saying the firing would have a “chilling effect” and was “unconscionable” during a pandemic. And a prominent Senate Republican said the administration needed to provide more information about why Atkinson was fired.

In letters to Congress informing them of the firing, which were obtained by The Associated Press, Trump said that it is “vital” that he has confidence in the appointees serving as inspectors general, and “that is no longer the case with regard to this inspector general.”

Trump said Atkinson would be removed from office in 30 days, the required amount of time he must wait after informing Congress. He wrote that he would nominate an individual “who has my full confidence” at a later date.

Atkinson was the first to inform Congress about the whistleblower complaint last year that described Trump's pressure on Ukraine to investigate Democrat Joe Biden and his son. That complaint prompted a House investigation that ultimately resulted in Trump's impeachment.

Atkinson informed lawmakers of the existence of the complaint in September, saying he believed the complaint was “urgent” and “credible.” But the acting director of national intelligence at the time, Joseph Maguire, said he did not believe it met the definition of “urgent,” and tried to withhold it from Congress.

The complaint was eventually released after a firestorm, and it revealed that Trump had asked Ukrainian President Volodymyr Zelenskiy in a July call to investigate the Bidens. The House launched an inquiry in September, and three months later voted to impeach Trump. The Republican-led Senate acquitted Trump in February.

Atkinson's firing thrusts the president's impeachment back into the spotlight as his administration deals with the deadly spread of the coronavirus. As Trump was removing Atkinson, the number of U.S. deaths due to the virus topped 7,000. By the time of his remarks Saturday, it was over 8,100.

The top Democrat on the Senate intelligence panel, Virginia Sen. Mark Warner, said it was unconscionable that Trump would fire Atkinson in the midst of the coronavirus pandemic.

“We should all be deeply disturbed by ongoing attempts to politicize the nation's intelligence agencies,” Warner said.

Sen. Chuck Grassley, the Republican chairman of the Finance Committee, said in a statement that inspectors general “help drain the swamp,” a phrase often used by Trump.

“Congress has been crystal clear that written reasons must be given when IGs are removed for a lack of confidence,” Grassley said. “More details are needed from the administration.”

“Like any political appointee, the inspector general serves at the behest of the executive,” Burr said. “However, in order to be effective, the IG must be allowed to conduct his or her work independent of internal or external pressure.”

Tom Monheim, a career intelligence professional, will become the acting inspector general for the intelligence community, according to an intelligence official who was not authorized to discuss personnel changes and spoke only on condition of anonymity. Monheim is currently the general counsel of the National Geospatial-Intelligence Agency.

Atkinson had hinted of frustration on the job in a March letter to Schumer, in which he said “the past six months have been a searing time for whistleblowers.” Atkinson was responding to a letter Schumer had sent to agency inspectors general asking them to document and investigate any instances of retaliation after Trump had threatened the anonymous whistleblower.

In the letter, obtained by the AP, Atkinson said support for whistleblowers was rendered meaningless if “whistleblowers actually come forward in good faith with information concerning an extraordinary matter and are allowed to be vilified, threatened, publicly ridiculed, or - perhaps even worse, utterly abandoned by fair weather whistleblower champions.”