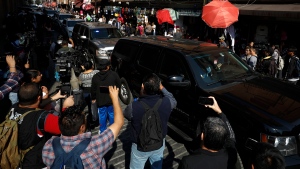 WASHINGTON -- President Donald Trump said Friday in a tweet that he will hold off on designating Mexican drug cartels as terrorist organizations.

Trump said all the work had been completed and he was statutorily ready to issue a declaration but had decided to delay at the request of Mexican President Andres Manuel Lopez Obrador.

The Mexican government had pushed back against Trump's plan, saying such a step by the U.S. could lead to violations of its sovereignty.

"All necessary work has been completed to declare Mexican Cartels terrorist organizations," Trump wrote on Twitter. "Statutorily we are ready to do so."

"However, at the request of a man who I like and respect, and has worked so well with us, President Andres Manuel ↕LopezObrador-- we will temporarily hold off on this designation."

Mexico's president thanked Trump for his decision to "temporarily hold off" on designation Mexican drug cartels as terrorist organizations.

In a speech after Trump's tweet, Lopez Obrador said, "I thank Trump for having put off the decision ... and having chosen understanding and co-operation."

Under pressure from Trump's threat to impose tariffs, Mexico has pressed thousands of national guard troops into service to help block Central American migrants from travelling through Mexico to reach the U.S.

In place of designating the cartels as terrorist outfits, Trump said the U.S. and Mexico instead will "step up our joint efforts to deal decisively with these vicious and every-growing organizations."

It was unclear if Mexico had promised Trump anything in return for suspending the designation, which could have caused Mexico headaches. Such a designation might require Mexico to periodically gain U.S. certification that it was co-operating in fighting the cartels, and could potentially have affected Mexico's access to international lending agencies.

The issue came to the fore after the Nov. 4 slaughter of nine U.S.-Mexico dual nationals in the northern border state of Sonora by drug cartel gunmen.

Trump said in a radio interview just last week that he "absolutely" would move ahead with designating the drug cartels as terrorist organizations, attributing American deaths to drug trafficking and other activity by the cartels.

"I've been working on that for the last 90 days," Trump said in the interview when host Bill O'Reilly asked whether such a designation would be forthcoming.

O'Reilly had asked if Trump would designate the cartels "and start hitting them with drones and things like that?"

Trump replied: "I don't want to say what I'm going to do, but they will be designated."