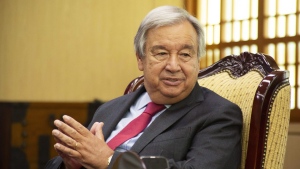 Guterres, who arrived in South Korea on Thursday, later met with South Korean Foreign Minster Park Jin, who said the U.N.-led international community should be communicating a stern and unified message to North Korea that its nuclear ambitions won't be tolerated.

Park called for the U.N.’s help in finding an effective solution to the North Korean nuclear issue, and Guterres expressed support for South Korean efforts to stabilize peace in the peninsula, the Foreign Ministry said.

The unusually fast pace in weapons demonstrations also underscore brinkmanship aimed at forcing Washington to accept the idea of North Korea as a nuclear power and negotiating badly needed sanctions relief and security concessions from a position of strength, experts say. The U.S. and South Korean governments have also said the North is gearing up to conduct its first nuclear test since September 2017, when it claimed to have detonated a nuclear warhead designed for its ICBMs.

While the Biden administration has said it would push for additional sanctions if North Korea conducts another nuclear test, the prospects for meaningful punitive measures are unclear. China and Russia recently vetoed U.S.-sponsored resolutions at the U.N. Security Council that would have increased sanctions on the North over some of its ballistic missile testing this year, underscoring division between the council’s permanent members that has deepened over Russia’s war on Ukraine.

Guterres’ meetings with South Korean officials came a day after North Korea claimed a widely disputed victory over COVID-19 but also blamed rival South Korea for the outbreak, vowing “deadly” retaliation. The North insists its initial infections were caused by leaflets and other objects flown across the border on balloons launched by South Korea's anti-Pyongyang activists, a claim Seoul describes as unscientific and “ridiculous."

North Korea has a history of dialing up pressure on the South when it doesn’t get what it wants from the United States, and there are concerns that North Korea's threat portends a provocation, which might include nuclear or missile tests or even border skirmishes.