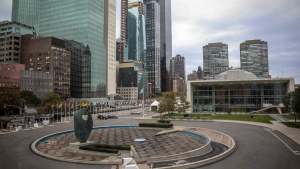 The United Nations headquarters iconic water fountain, constructed with funds donated by school children from across the United States in 1952, is currently off because of a cash crisis within the U.N., Friday Oct. 11, 2019. (AP Photo/Bebeto Matthews)

The United States said Friday it has paid the United Nations $180 million toward its annual dues and expects to make another payment of $96 million within the next few weeks, which should help ease the U.N.'s worst cash crisis in nearly a decade.

U.S. deputy ambassador Cherith Norman Chalet, who is in charge of management and reform issues, made the announcement Friday to the General Assembly's budget and finance committee.

She said the United States anticipates making “further contributions in November as well.”

Last week, Secretary-General Antonio Guterres said the U.N. was facing a major cash crisis because 64 of its 193 member nations hadn't paid their annual dues - Including the United States, its largest contributor.

The U.N. chief said the world organization risked depleting its liquidity reserves by the end of October and defaulting on payments to staff and vendors.

U.N. management chief Catherine Pollard told the General Assembly's budget committee last Friday that 128 countries had paid $1.99 billion in dues for the U.N.'s 2019 operating budget by Oct. 4. But she said $1.386 billion was owed for this year by 65 countries - including more than $1 billion by the United States.

A key problem, she said, is that “the cash deficits occur earlier in the year, linger longer and run deeper.”

Pollard said the payments received by Oct. 4 represented only 70 per cent of the total amount assessed, compared to 78 per cent at the same time last year, “resulting in a gap of $230 million.”

To fully implement the U.N. budget, she said, the U.N. would need to collect at least $808 million between October and December.

According to figures Pollard presented, the United States owes $1.055 billion to the U.N.'s regular budget - $674 million for 2019 and $381 million for previous budgets - compared with $842 million at the same time last year.

The U.S. also owes $3.7 billion to the separate budget for the U.N.'s 14 far-flung peacekeeping operations.

Ambassador Chalet told the budget committee that because of differences in the U.S. and U.N. budget years, the United States has made its regular budget payments after Oct. 1 for more than 35 years.

“Members should not be misled by some who would want to distort facts,” she stressed.

Chalet said the U.S. has also paid over $600 million to the peacekeeping budget since the beginning of the year.

“The United States continues to be the largest contributor to the United Nations with nearly $10 billion in assessed and voluntary contributions annually, system-wide,” Chalet said.

U.N. deputy spokesman Farhan Haq refused Thursday to confirm the U.S. payment but said there had been “a number of partial payments.”

“Our expectation is we will be able now to meet our payroll for the month of November - and we'll see where we go from there,” he said.